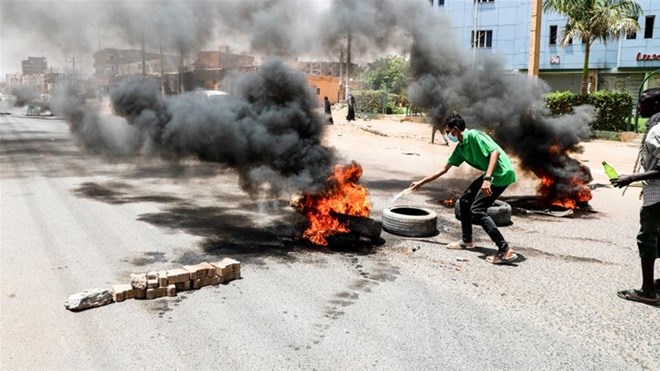 Sudanese protesters say at least 35 have been killed after security forces stormed the main protest camp in the capital, Khartoum, in the worst violence since the overthrow of President Omar al-Bashir, drawing global condemnation.

“We are holding the Transitional Military Council (TMC) responsible for what happened this morning,” the SPA said, referring to the military council which currently runs the country.Pro-democracy leaders have called on people to take part in night marches and block the main roads as part of “total civil disobedience” to “paralyse public life” across the country.

A doctors’ committee linked to the protesters said in a Facebook post on Monday that the death toll, which includes at least one child, had risen to at least 35, adding that it had been difficult to count in the sit-in area outside the military complex in Khartoum.

The group said hundreds of people had been wounded, mostly from gunfire, and that according to witnesses, bodies of protesters shot dead were disposed of in the Nile River near the site of the protest sit-in.

The United Nations condemned the use of excessive force by the security forces against protesters and called for an independent investigation into the killings.

UN Secretary-General Antonio Guterres said in a statement that he was “alarmed” by reports that security forces had opened fire inside a hospital in Khartoum.

“What is clear to us is that there was use of excessive force by the security forces on civilians. People have died. People have been injured,” said UN spokesman Stephane Dujarric.

Guterres urged Sudanese authorities to facilitate an independent investigation of the deaths and ensure that those responsible are held accountable. He also renewed his call for negotiations to resume on a peaceful transfer of power to a civilian-led authority.

Witnesses said the main sit-in outside the defence ministry had been cleared. Footage shared on social media showed chaotic scenes of people fleeing through streets as sustained bursts of gunfire crackled in the air.

Protesters poured onto streets elsewhere in Khartoum and beyond in response, setting up barricades and roadblocks with rocks and burning tyres.

The doctors’ committee said forces had opened fire inside the city’s East Nile Hospital and had chased “peaceful protesters”.

It said another hospital near the site of the sit-in had been surrounded and that volunteers were prevented from reaching it.

The British ambassador to Sudan, Irfan Siddiq, tweeted that the attacks on hospitals and clinics “defy belief”.

“Those injured in today’s horrific attacks need unhindered access to medical treatment,” he said. “Medical centres must be a safe place.”

The TMC denied the attacks on hospitals, with spokesperson Lieutenant General Shams El Din Kabbashi saying security forces were pursuing “unruly elements” who had fled to the protest site and caused chaos.

“The Transitional Military Council regrets the way the situation unfolded, reaffirming its full commitment to the … safety of the citizens and renews its call for negotiations as soon as possible,” the TMC said in a statement.

The council is now overseeing a two-year transitional period during which it has pledged to hold presidential elections.

Demonstrators, however, have remained on the streets to demand the TMC relinquish power – at the earliest possible date – to a civilian authority.

The crackdown has elicited strong reactions from the international community, who are holding the TMC fully responsible for what has happened.

The African Union has called on the TMC and protest leaders to return “urgently” to negotiations, appeals which were echoed by Qatar and Germany.

The United States called the assault “wrong” and said it must be stopped.

Former British ambassador to Sudan, Rosalind Marsden, told Al Jazeera that it remains to be seen whether statements denouncing the TMC will be followed by concrete action.

“Will there be a UN Security Council discussion on this in the next few days?” she said, speaking from London.

“Some of the opposition leaders are asking the UN Security Council and the African Union to demand an immediate transfer of power from the Transitional Military Council to a democratic civilian government led by the Forces of Freedom and Change, as well as an immediate end to Sudan’s internal wars,” she continued.

“The protest movement regards what happened this morning as a major betrayal of trust of the Sudanese people who were ready to regard the TMC as partners in the process of democratisation,” she said.