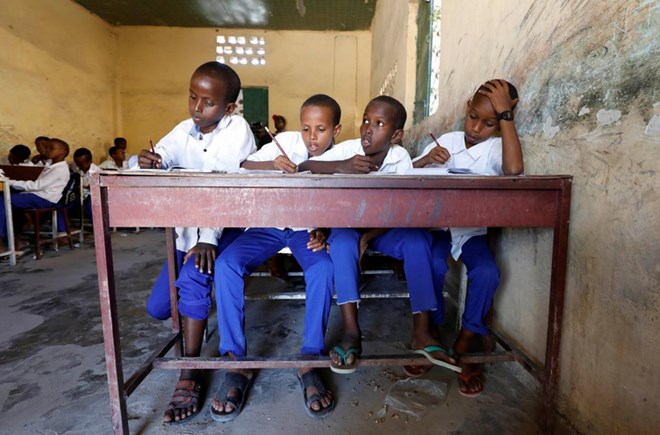 Every school day, Shuayb Muhidin travels Mogadishu’s battle-scarred streets to get to Banadir Zone School. For years, the government has battled Islamist insurgents but now authorities are also turning to a new challenge: schools like Muhudin’s.

The start of this school year marks the first time since the civil war broke out in 1991 that the government has issued a new curriculum for primary and secondary school students.

As clan warlords battled each other and armed factions rose and fell, schools had to make do with whatever materials came to hand. More than 40 curricula were used across Somalia, creating a hodgepodge of competing education systems in a variety of languages, the government said.

Muhidin’s school, for example, used Kenyan textbooks but 2 million textbooks printed in Somali have been issued to pupils in most of Somalia since August and their schools have synchronized academic terms, the ministry of education said.

“This new syllabus is better than the old Kenyan syllabus, which was in English. The new curriculum is the best,” Muhidin said, sitting three-abreast at a desk in his year seven maths and physics class.

Somalia has one of the world’s lowest enrolment rates, with only four out of 10 children here in school, according to the United Nations. Education accounted for $16 million out of this year’s budget of $344 million.

Schools sourced textbooks from more than 10 countries during the civil war and English and Arabic replaced Somali as the language of instruction.

“Students have coped well with the new curriculum because it is based on their religion, culture and vernacular,” said Muhidin’s teacher, Abdulkadir Mohamed Sheikh.

The government hopes the new textbooks will help counter their message.

Clerics helped the government train teachers in Islamic ethics and create a syllabus that “will produce students who are sound, who are free from terror ideology, moderate students who have Islamic knowledge as well as other subjects”, Abdulle said.