The UK is supporting up to 80,000 people affected by floods in Somalia – Ambassador Fende

The UK is supporting up to 80,000 people affected by floods in Somalia – Ambassador Fende 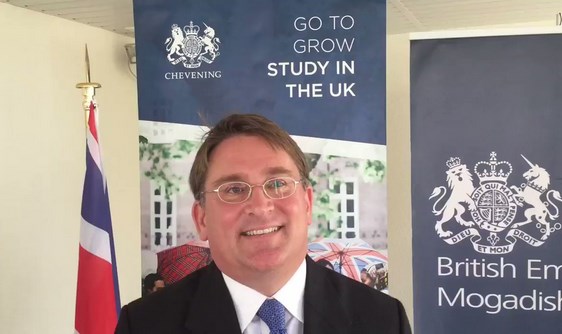 MOGADISHU (HOL) – The UK is reaching out to up to 80,000 people through its existing programme to provide humanitarian supplies to communities affected by floods across Somalia, the UK ambassador Ben Fender has said.

In an exclusive interview with HOL, the UK ambassador said through its network of partners on the ground, it has been able to contribute significantly to alleviate suffering among communities affected by the recent floods which the UN estimates has displaced 182,000 people.“We are doing everything we can to support emergency response. We are currently supporting between 70,000 to 80,000 people with water supply, emergency food and shelter through our existing programme,” ambassador Fender said.

Noting that the UK makes its contributions through the Somali Humanitarian Fund, the UK diplomat noted his country is also committed to long term programmes to address the perennial climate challenges facing Somalia.

As well as responding to the immediate relief efforts, ambassador Fender said, “We must invest in ensuring such problems do not recur.

The UK has a programme of about $75 million over the few years, the Building Resilience in Community (BRiCS) that works with over 200 communities to help make sure they are better equipped to deal with climate shocks as the kind we are seen now.”

The target communities include those in Beletwyene, Bardhere and other affected areas, the UK ambassador said.

Noting that the accelerating impact of climate change plays a significant role in the weather changes witnessed in the country, ambassador Fender said his country is championing for Somalia’s debt relief to enable the country access much needed credit from the World Bank to rebuild infrastructure.

“One of the areas the World Bank wants to look at is the provision of water infrastructure and that will make a while difference in communities in Jubba and Shabelle,” said ambassador Fender.

As of Tuesday, 182,000 people had been displaced countrywide with a majority of these (164,000) in Beletweyne according to the UN humanitarian agency OCHA. The UN body also noted 85% of Beletweyne town had been submerged in water.