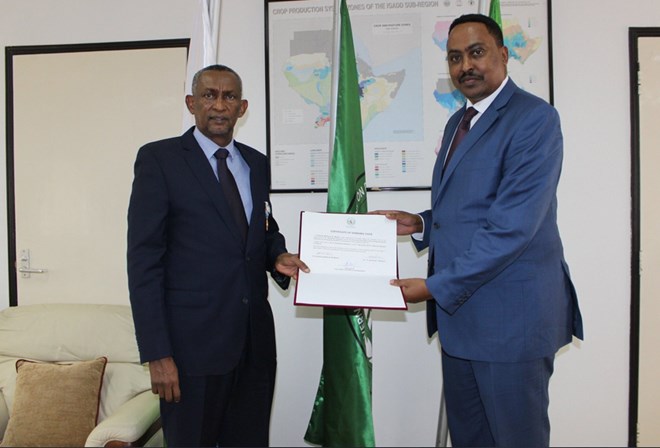 Ethiopian Prime Minister who is the current chairman of the eight-member bloc appointed Dr. Gebeyehu late last month to take over from Ambassador Mahboub Maalim, a Kenyan who had hitherto been in the post since 2008.Maalim was appointed in June 2008 and later reappointed for another two four year term in 2012.
Somalia is the only member which has never held the position of Executive Secretary since the regional bloc was formed in 1986 and later reformed in 1996.

Both Somali and Djibouti had been eyeing the position of the Executive Secretary and chairman but reports indicated Kenya and Ethiopia which are also major financial contributors to the regional bloc planned to swap the positions.

Ethiopia has held the position of chairman since 2010 when then Kenyan president Mwai Kibaki handed over to Prime Minister Meles Zenawi who later bequeathed his successor Desalegn Hailemariam. Current Premier Ahmed Abiy is the holder of the same position.

The ordinary heads of state summit will formally endorse Dr. Gebeyeh’s appointment. The same summit will also decide on who will take over the chairmanship of the regional bloc.

Should the supposed pact between Kenya and Ethiopia prevail, then most likely President Uhuru Kenyatta will become the new chair of the bloc.

There have been calls for reforms in the regional bloc to make it more robust and democratic in its functioning to allow chances for the rest of the members who include Eritrea, Somalia, South Sudan and Uganda. Sudan held the position of Executive Secretary between 2000 and 2008.