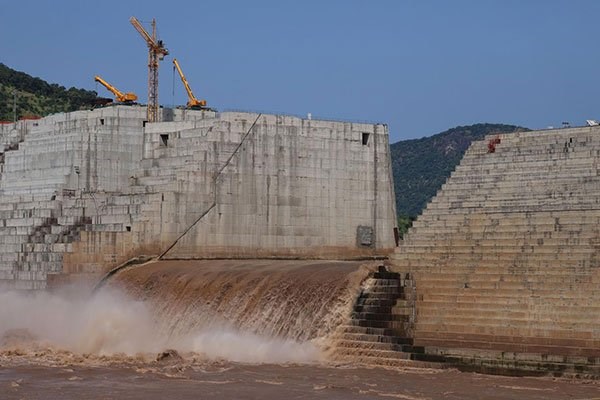 US President Donald Trump has told ministers from Ethiopia, Egypt and Sudan that he will “cut the ribbon” at the inauguration of the controversial Grand Renaissance Dam when it is completed, an Ethiopian minister says.

Sileshi Bekele, Ethiopia’s minister for water and irrigation, said Mr Trump made the comments during US-mediated talks aimed at solving a diplomatic row between the three countries over the sharing of the River Nile’s waters.

During the meeting, the three sides agreed to hold further talks in the US, and to reach a final settlement by 15 January.

Speaking to reporters (in Amharic) on Thursday, Mr Sileshi said:”President Trump sat with six people [two from each country] and tried to understand the situation. At the end of the discussion, he said he’d want to cut the ribbon with us on the inauguration.”
“But he stressed that we should avoid differences and work in cooperation. He’s given direction to the treasury secretary to lead discussions for smooth, quick and careful completion of the project.”

A joint statement issued on behalf of the three countries by the US Treasury Department did not mention any plans by the US president to open the dam.

The $4bn dam, the structure of which is expected to be finished next year, is at the heart of Ethiopia’s manufacturing and industrial dreams.

When fully operational, it is expected to be able to generate a massive 6,000 megawatts of electricity.

But Egypt fears the project will allow Ethiopia to control the flow of Africa’s longest river.