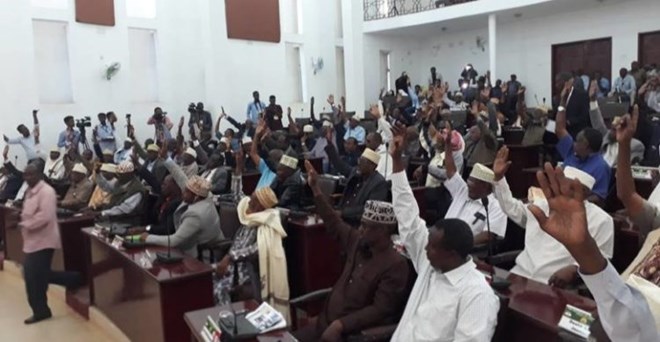 MOGADISHU (HOL) – Somaliland House of Elders Saturday approved another term extension for itself and the Lower House adding to six the number of times the elections have been postponed since the current parliament was elected in 2005.

The vote which came amid political instability in the break-away region following tussles over the composition of the national electoral body (SNEC) added the Upper House (Guurti) three years and the House of Representatives (Lower House) two more years.The elections which have been postponed since 2010 were to be held in March 2019 but Somaliland National Electoral Commission (SNEC) announced it would postpone the exercise to a later date. It had cited pressure from the opposition and inadequate preparations.

The opposition party Waddani protested last week what it termed as attempts by the ruling party Kulmiye to appoint cronies to SNEC sending protestors to the streets.

In Saturday’s vote 70 out of the 71 Senators present voted to extend the life of parliament effectively postponing the elections to 2022.

From 2010 when the term of the current parliament lapsed, the House of Elders has utilized its powers to extend the elections a number of times despite local and international pressure.

The Constitutional Court ruled against extensions in 2015 but more extensions were to come in 2017 and 2018.