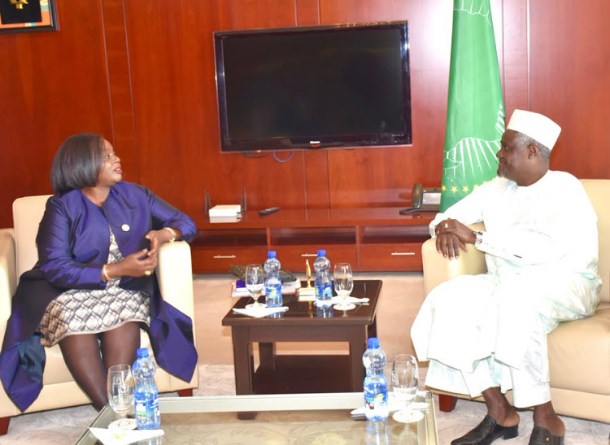 Kenya has asked the Africa Union to ensure it protects the integrity of the continental organisation and fidelity to its procedures over Djibouti’s insistence to continue its bid for the UN Security Council non-permanent seat.

Foreign Affairs CS Raychelle Omamo, while appreciating AU’s endorsement of Kenya as Africa’s candidate for the UNSC seat, talked of the need to ensure the organisation’s procedures are respected.

“CS Omamo appreciated AU’s endorsement of Kenya as Africa’s candidate for a non-permanent seat of the UNSC for the period 2021-2022 and expressed Kenya’s conviction on the need to protect the integrity of the Union and fidelity to its procedures,” Foreign Affairs said in a dispatch on Wednesday.CS Omamo held consultations with  AU Commission chairman Moussa Faki in Addis Ababa, with sources saying she sought clarification on why Djibouti is still in the race.

Kenya in August last year won the second round of voting at the AU, effectively getting the UN Security Council endorsement.

It garnered 37 votes against Djibouti’s 13 in a vote taken in Addis Ababa, Ethiopia. Kenya was, after the vote, confident that with AU’s endorsement, it would have an easy campaign to secure the seat.

But in a surprise move, Djibouti reversed its decision to back Kenya’s endorsement by the AU as the single candidate for the UN Security Council non-permanent seat and is currently lobbying for the seat.

Djibouti argues that the AU disregarded its two paramount principles in selecting its candidate for the security council — rotation and frequency.

“Under these rules, it is indisputable that Djibouti should be the sole African candidate for the period 2021-2022,” Djibouti Permanent Representative to the UN Amb Mohamed Doualeh said.

But at the time, then Foreign Affairs CS Monica Juma said the endorsement was an affirmation that Kenya has remained true to the decisions and aspirations of the African Union.

“Amb Omamo underscored Kenya’s commitment to the aspirations of the continental body and reaffirmed that Kenya will continue to play its rightful role in the promotion of peace and security in the region,” a statement by Foreign Affairs on Wednesday said.

Omamo is leading the Kenyan delegation to the 33rd Ordinary Session of the African Union Heads of State and Summit as President Uhuru Kenyatta is in the US.

She appreciated AU’s endorsement of Kenya as Africa’s candidate for a non-permanent seat of the United Nations Security Council for the period 2021-2022 and expressed Kenya’s conviction on the need to protect the integrity of the Union and fidelity to its procedures.

He also acknowledged Kenya’s role in bolstering peace and stability in Africa as in the case of Somalia, South Sudan and Sudan.

The Summit is discussing ‘silencing guns’, a reference to efforts to stop violence on the continent.

Djibouti, the little country in the Horn, lobbied for its bid in Nairobi during ninth Africa, Caribbean and Pacific Heads of State and Government Summit in Nairobi.

Hibaa Ismael, Djibouti’s third counsellor in charge of Multilateral Relations in its Kenyan embassy posted photos of the country’s delegation for the ACP conference accompanied by UNSC bid captions.

The rivalry also played out at 18th Summit of Heads of State and Government of the Non-Aligned Movement, the largest organisation after the UN, with 120 member states and 17 observer nations.