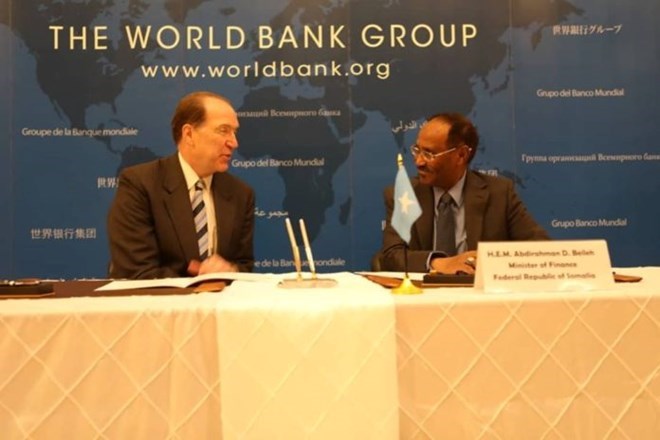 MOGADISHU (HOL) –  President Mohamed Farmaajo and Prime Minister Hassan Khaire have lauded their country’s achievement of a major milestone in the debt relief process following the announcement Wednesday the country had qualified for interim debt relief.

A statement from Villa Somalia noted the President’s appreciation adding the decision by the World Bank and IMF was critical for reforms in Somalia.

“This debt relief decision by IMF, WB, IDA and the support from friends of Somalia, is a timely boost for our longstanding transformation and sectoral reforms in Somalia,” the statement read in part.

The president added his administration ‘will maintain our sustained efforts and institutional strengthening for the completion of this journey.’

The PM said reaching the Decision Point was crucial for the country to enhance its reform and recovery process.

“The Government and People of Somalia are very pleased by the IMF’s and World Bank Group’s decision which allows Somalia to fully re-engage with International Financial Institutions,” the PM said. “This decision is an important milestone which presents ample opportunities for Somalia as it relentlessly pursues its ongoing reform processes as well as its recovery and development agenda.”

The IMF and World announced Wednesday Somalia had now qualified for debt relief after meeting reform benchmarks and clearing debts owed to its multilateral creditors.According to the Fund, Somalia has cleared all arrears due to the World Bank, IMF and International Development Fund through bridging loans.

Italy advanced a bridging loan which cleared Somalia’s arrears to the IMF while the UK and EU cleared the Africa Development Bank debt as Norway offset the World Bank debt. All the bridging loans have since been reimbursed, a statement from the Fund said.

The IMF said Somalia’s debt will ease off in three years’ time when the country is expected to reach the Completion Point under the Heavily Indebted Poor Countries (HIPC) initiative.

“Debt relief will help Somalia make lasting change for its people by allowing its debt to be irrevocably reduced from US$5.2 billion at end-2018 to US$557 million in net present value terms (NPV) once it reaches the HIPC Completion Point in about three years’ time,” the IMF said.

Once the country reaches the Completion Point, the remaining debt will be cleared by the World Bank, IMF and African Development Bank through the Multilateral Debt Relief Initiative (MDRI) process.