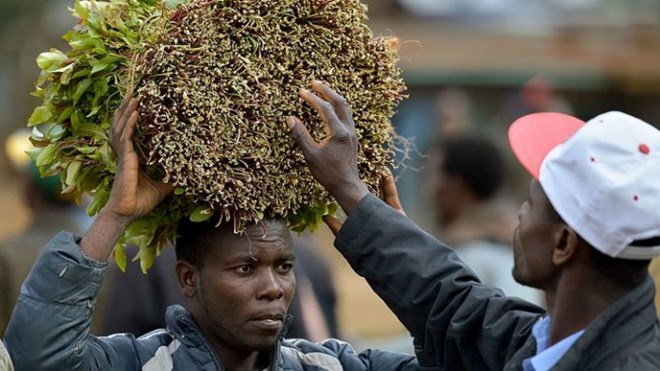 A khat farmer carries his khat harvest at a local open air market at Maua, in Meru county on September 9, 2016 in Kenya’s central province

Flights carrying the mild stimulant khat have been banned from entering Somalia, leaving chewers of the leaves in a stew, write the BBC’s Mary Harper and Bella Hassan.

In normal times, around midday, when the bunches of fresh leaves arrive in Somalia’s capital, Mogadishu, by plane from Kenya, men disappear from view, lounging in khat kiosks or chewing at home.

The leaf, also known as miraa, acts as a stimulant, sending users into a frenzy of excited chatter. Business deals are made and broken, tired fighters are kept awake.

In March, the government of Somalia banned international flights, including khat planes, as part of its efforts to contain coronavirus.When it imposed a lockdown, it forbade people from gathering together to chew their beloved leaves as this would break social distancing rules. Officials warned that because khat is picked by hand it could help spread Covid-19.

But the stimulant is still finding its way into the country.

Some comes in by road from Ethiopia. Some is transported by boat from Kenya, where many khat growers and traders say they have lost their livelihoods. The situation is especially grave in central Meru county, the heartland of khat farming in Kenya.

The chairman of the Nyambene Miraa Traders’ Association, Kimathi Munjuri, said members of his organisation exported about $250,000 (£200,000) worth of khat a day to the Somali capital, Mogadishu.

About half-a-million farmers cultivate the stimulant in the Horn of Africa; many will be hit hard by the ban.

Although most khat sellers in Somalia have nothing to trade, a few crafty dealers have hit a goldmine.

“Before Covid-19, we got fresh leaves from Kenya,” says a woman who sells khat in Mogadishu. “Now we get it illegally from the port city of Kismayo, and because it is so limited, we can push up the price. I used to sell one kilo of leaves for about $20 to $25. Now I sell it for $120. This ban has been very good for us.” 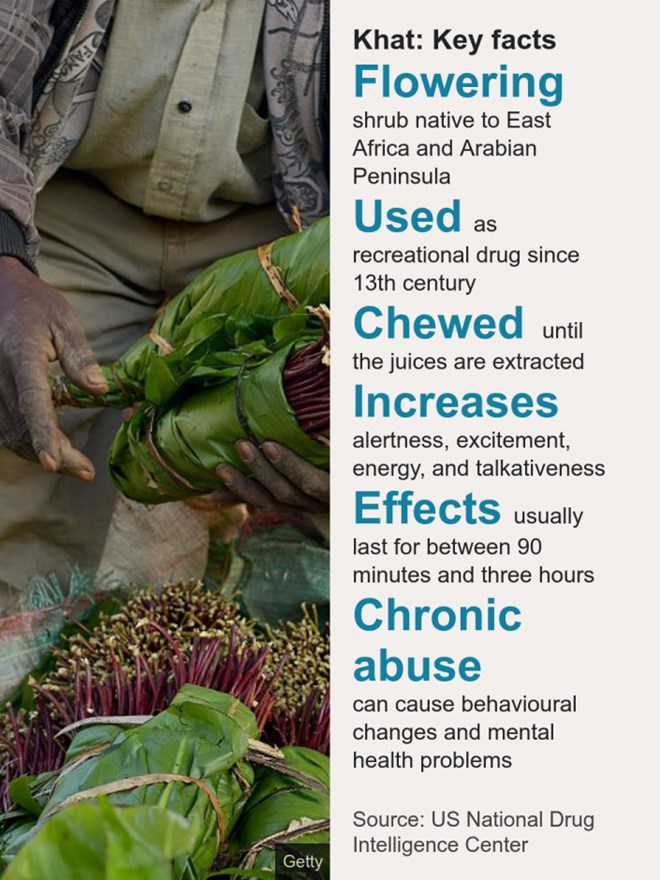 “A man without khat is like a fish out of water,” says Mohamed Abdi, a committed chewer in Mogadishu. “I have to have my fix, no matter what. But I cannot afford the exorbitant prices, so I am going quietly mad.”

“I have stopped consuming khat because of the crazy prices,” says another chewer, Hassan Abdiwali. “Some of my friends have started using other substances like illegal drugs or homemade alcohol. Others have started to rob so they can afford to buy khat. For us khat lovers, this is the worst situation we have ever been in.”

The leaf is very popular among the security forces, whose pay is far too low for them to afford the current prices. There have been reports that some police and soldiers are stealing phones and money to pay for khat.

The stimulant is especially popular in the self-declared republic of Somaliland, where it has also been temporarily banned because of coronavirus. The authorities say it makes social distancing impossible and that they will reassess the situation after the Islamic holy month Ramadan.

Most of Somaliland’s khat comes in by road from Ethiopia. Trucks piled high with bunches of leaves race in, horns blaring, to make sure the delivery is fresh on arrival. Vehicles caught under the current ban are confiscated. Any khat that is found is burned. 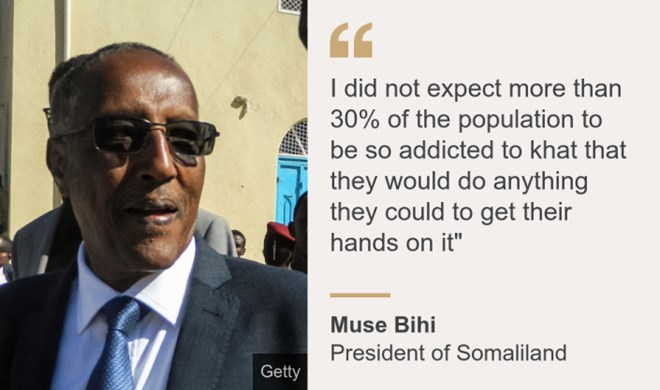 ” I did not expect more than 30% of the population to be so addicted to khat that they would do anything they could to get their hands on it””, Source: Muse Bihi, Source description: President of Somaliland, Image:
Many of Somaliland’s major dealers have agreed to the ban, saying people’s health is more important than anything. But some sneaks into the territory, also fetching sky-high prices.

“I expected some people to try to smuggle khat into the territory during the suspension,” said the president of Somaliland, Muse Bihi. “But I did not expect more than 30% of the population to be so addicted to it that they would do anything they could to get their hands on it.”

Some people are delighted with the ban, especially anti-khat campaigners like Abukar Awale.

“The ban is a blessing from the skies. There is less domestic violence, less divorce and wives are happy because their husbands are spending their money on their families, not the drug,” he says.

“Productivity is increasing because men can no longer spend six hours a day wasting their time chewing khat. If Somalia wants to rise again, it should use the hundreds of millions of dollars spent on that awful drug for the development of the country,” he adds.

Mr Awale says khat also damages people’s health. It can damage teeth and there are concerns of a possible link to mouth cancer.

Some doctors say regular chewing can lead to addiction and psychosis, although a Home Affairs Select Committee in the UK, where the stimulant was banned in 2014 and labelled a class C drug, said there was no evidence of a direct link between khat and psychosis.

Mr Awale hopes the ban will last forever. But this is unlikely. Previous bans on khat flights from Kenya have not lasted.

There is a strong pro-khat lobby in Somalia. It is unlikely politicians will outlaw the drug as it is such a central part of the economy and of social life. Plus, many of those in powerful positions are not averse to a lively chewing session themselves.