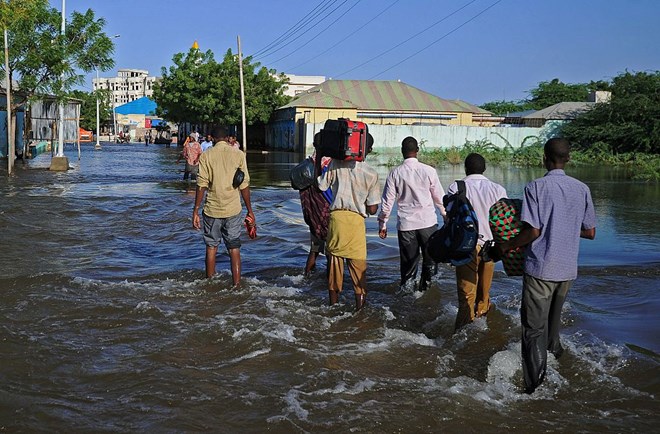 24 people have been killed and more than 283,000 others have been displaced by floods in Somalia, according to figures released by the United Nations Office for the Coordination of Humanitarian Affairs (OCHA) in Somalia.

The figures also indicated that 28 districts and more than 701,000 people in the Horn of Africa nation have been affected by the floods.

The worst affected states are Hirshabelle, Jubaland and South West with their numbers accounting for 88 percent of those affected by the floods. The destruction caused by the floods is evidenced by the fact that most parts of an entire small town in Puntland were swept away by floodwaters.

According to the OCHA in Somalia, majority of the cases of flooding in the country have been caused by flash flooding.Hundreds of people in the East and Horn of Africa regions have been killed while thousands of others have been displaced by heavy rains and the resulting floods and landslides.

The heavy rains have been caused by moisture dumped in the region by winds coming in from the Indian Ocean where temperatures have risen in recent months, according to Chris Shisanya, a professor of climatology in Nairobi, who spoke to Reuters.

Kenya has been the worst hit so far with the government recently reporting that at least 237 people had been killed and more than 161,000 others displaced since heavy rains began in April.

At the end of 2019, rain-triggered disasters, including flash floods and landslides, killed at least 250 people and affected millions of others across East Africa.

Somalia is currently facing a triple threat of problems: the floods, the COVID-19 pandemic which is straining its already fragile health system and the desert locust infestation.