Ethiopia wants to fill dam’s reservoir in coming weeks but Egypt says that could significantly reduce its Nile water. 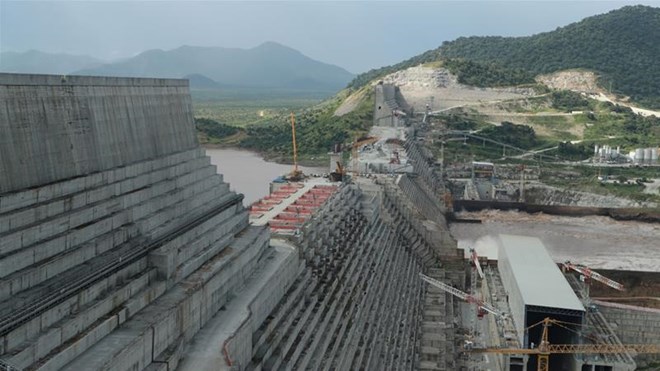 The three countries have been holding talks about the dam for years without reaching a deal [File: Tiksa Negeri/Reuters]

Egypt and Sudan have said that talks over a controversial dam on the Nile River will resume on Monday, amid Egyptian accusations that Ethiopia has sought to scrap “all agreements and deals” they had previously reached, and that “many fundamental issues” remain rejected by Ethiopia, the third party to the talks.

The construction of the $4.6bn Grand Ethiopian Renaissance Dam on the Blue Nile, which is more than 70 percent complete and promises to provide much-needed electricity to Ethiopia’s 100 million people, has been a contentious point among the three main Nile Basin countries.

The three countries have been holding talks for years without reaching a deal. Those talks came to an acrimonious halt in February when Ethiopia rejected a US-crafted deal and accused the Trump administration of siding with Egypt.

Ethiopia wants to begin filling the dam’s reservoir in coming weeks, but Egypt has raised concerns that filling the reservoir behind the dam too quickly could significantly reduce the amount of Nile water available to Egypt.After months of deadlock, Sudanese, Egyptian and Ethiopian water and irrigation ministers resumed talks last week, with observers attending from the US, the European Union and South Africa, which is the current head of the African Union.

Sudan’s irrigation ministry said Saturday’s talks focused on technical matters of the dam’s operation and the filling of its massive reservoir during rainy seasons and droughts. It said it will craft a draft paper based on Egyptian and Ethiopian notes to be discussed on Monday.

“Egypt reaffirmed that these are essential components in any agreement that relates to an existential matter that affects the lives of over 150 million citizens of Egypt and Sudan,” the statement said.

Ethiopia’s water and energy ministry said the talks have achieved progress and they will result in “finalising the process with a win-win outcome”.

It said the three countries reached an understanding on the first stage of filling and the approach to drought management rules.

But Mohammed el-Sebaei, a spokesman for Egypt’s irrigation ministry, said Ethiopia rejected a Sudanese proposal last week that could be a basis for negotiations between the three countries. Instead, Addis Ababa introduced a “worrisome” proposal that included its vision on the dam’s operation.

He said Ethiopia lacked the “political will” to compromise and wants Egypt and Sudan to “abandon their water rights and to recognise Ethiopia’s right to use the Blue Nile waters unilaterally and to fill and operate the Renaissance Dam in accordance with its vision”.

“The proposal is not legally and technically sound,” he told reporters in Cairo. “It is a clear attempt to impose a fait accompli on my downstream country.”

The Ethiopian ministry said el-Sebaei’s comments were “regrettable”. It said that if the continuing negotiations failed it would be because of “Egypt’s obstinacy to maintain a colonial-based water allocation agreement that denies Ethiopia and all the upstream countries their natural and legitimate rights”.

The Blue Nile flows from Ethiopia into Sudan where it joins the White Nile near the capital, Khartoum, to form the Nile River. Eighty-five percent of Nile waters originate in Ethiopia from the Blue Nile, which is one of the Nile’s two main tributaries.

Egypt last week called for Ethiopia to “clearly declare that it had no intention of unilaterally filling the reservoir” and that a deal that was prepared by the US and the World Bank in February serves as the starting point of the resumed negotiations.

The US had crafted a draft deal in February after more than four months of talks, and said the final testing and filling of the dam “should not take place without an agreement”.

The deadlock over the dam has become increasingly bitter in recent months, with Egypt saying it would use “all available means” to defend “the interests” of its people.

Ethiopia’s deputy army chief on Friday said his country will strongly defend itself and will not negotiate its sovereignty over the disputed dam.