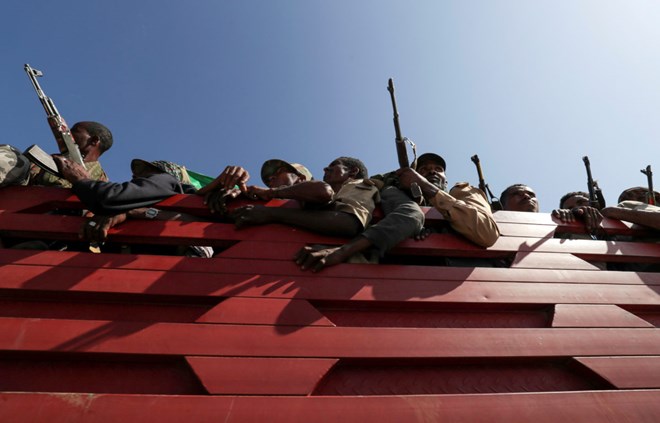 The sound of heavy weapons erupted across the Ethiopian border town, and immediately Filimon, a police officer, started to run.

Now, shaken and scared, he pauses when asked about his wife and two small children, ages 5 and 2. “I don’t know where my family is now,” he said, unsure if they were left behind in the fighting or are somewhere in the growing crowd of thousands of new refugees just over the border in Sudan.

In an interview with The Associated Press by phone on Thursday, the 30-year-old gave one of the first witness accounts from what experts warn is a brewing civil war with devastating humanitarian consequences. The conflict could draw in neighboring countries, too.
Filimon, who gave only his first name, said those attacking the Tigray regional town of Humera last week were coming from the direction of nearby Eritrea, though it was impossible to know whether the attackers were Eritrean forces.

Tigray regional leaders have accused Eritrea of joining the week-long conflict in the region at the request of Ethiopia’s federal government, which regards the Tigray government as illegal. Ethiopia has denied the involvement of Eritrean forces.

Filimon’s worries are far more immediate, though. After a day-long journey on foot with some 30 others fleeing, he has spent two days in Sudan, exposed to the sun and wind in a border town that is quickly becoming overwhelmed. Close to 10,000 refugees have fled into Sudan, where local authorities are preparing for up to 200,000.

Tensions over the deadly conflict in Ethiopia are spreading well beyond its cut-off northern Tigray region, as the federal government on Thursday said some 150 suspected “operatives” accused of seeking to “strike fear and terror” throughout the country had been detained.

The statement said the suspects “happen to be ethnically diverse,” but concerns remain high among ethnic Tigrayans amid reports of being singled out by authorities.

Ethiopia’s parliament voted to remove immunity from prosecution for 39 top Tigray region officials, including its president, accusing them of revolting and “attacking the federal army.”

Meanwhile, rallies occurred in multiple cities in support of the federal government’s military offensive against the Tigray regional government, the Tigray People’s Liberation Front. At a blood drive in the capital, Addis Ababa, donor Admasu Alamerew said that “I also want to pass my message to those people who are causing conflict and urge them to fear God and make peace.”

Ethiopia’s Nobel Peace Prize-winning Prime Minister Abiy Ahmed has rejected international pleas for negotiation and de-escalation, saying that cannot come until the TPLF ruling “clique” is removed and arrested and its heavily stocked arsenal is destroyed.
In a new statement, Abiy asserted that the western part of the Tigray region had been liberated, and accused the TPLF rulers of seeking to “destroy Ethiopia.” He accused the TPLF forces of abuses. Defense Minister Kenea Yadeta said a transitional administration will be set up in “rescued” areas, the Ethiopian News Agency reported.

What appeared to be a sudden slide toward civil war has been months in the making. Abiy after taking office in 2018 announced sweeping political reforms that won him the Nobel but marginalized the TPLF, which had dominated Ethiopia’s ruling coalition. The TPLF later left the coalition and in September held a local election in defiance of the federal government.

Each side now regards the other as illegal, and each blames the other for starting the fighting.

Communications and transport links remain severed in the Tigray region, making it difficult to verify claims, while the United Nations and others warn of a looming humanitarian disaster as food and fuel run short for millions of people.

There is no sign of a lull in the fighting that has included multiple airstrikes by federal forces and hundreds of people reported dead on each side. It is not clear how many of the dead are civilians.

The effects of the conflict risk drawing in Ethiopia’s neighbors, notably Sudan, whose leaders are under pressure from the international community, Ethiopia’s federal government and now the government of Eritrea, which the TPLF accuses of joining the fighting at Ethiopia’s request.

Experts fear that the Horn of Africa, one of the world’s most strategic regions, could be destabilized despite Abiy’s past peacemaking efforts.

The top U.S. diplomat to Africa, Tibor Nagy, spoke with Ethiopia’s foreign minister on Wednesday “to urge again immediate action to restore peace and de-escalate tensions,” a State Department spokesperson said in an email. “The protection and safeguarding of American citizens and all civilians is our top priority.”

More than 1,000 citizens of various countries are stuck in the Tigray region, the U.N. humanitarian chief in Ethiopia, Sajjad Mohammad Sajid, has told the AP.

Inside the Tigray region, long lines have appeared outside bread shops, and supply-laden trucks are stranded at its borders. Fuel is already being rationed.

“Every global agency, the U.N., is asking for a cease-fire but we haven’t seen any agreement, any willingness to dialogue,” U.N. refugee agency spokesman Kisut Gebreegziabher told the AP late Wednesday