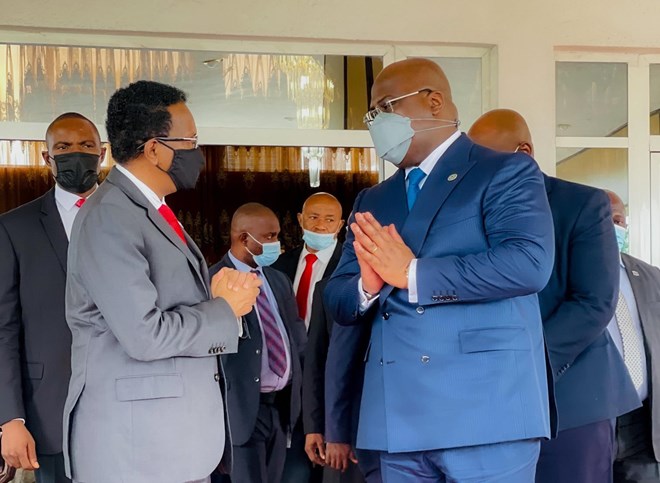 The announcement came on Sunday from the Ministry of Foreign Affairs and the President of the Democratic Republic of Congo. They emphasized that it would be a Somali-led and owned process.”With regards to # Somalia’s efforts to hold peaceful, inclusive, and timely elections, (Farmaajo’s) government would welcome the role of the AU in facilitating a Somali-led and Somali-owned engagement process that would lead to dialogue,” The Ministry said on Twitter.

Farmajo travelled to the capital of the Democratic Republic of Congo late Saturday evening for a one-day meeting with President Felix Tshisekedi, who is also the 2021 African Union Chairperson.

Mohamed Abdirizak, Somalia’s Minister of Foreign Affairs, travelled with Farmajo to Kinshasa for the meeting and said that Farmajo advocated for “African solutions to African problems.”

“Two presidents discussed bilateral issues as well as African issues, continental issues. In their discussions, President Farmajo talked about the need to encourage African Solutions to African Problems, and as such,  indicated his government’s willingness to see the AU take a leadership role in the facilitation of  an engagement process that would lead to dialogue amongst Somali stakeholders.”

The Minister emphasized that it would be a “Somali-led and Somali-owned” dialogue.

He said that President Tshisekedi was onboard with Farmajo’s suggestion of African solutions and talked about the need for continuity and political stability in Somalia.

“On his part, President Tshisekedi has talked about the need for continuity, political stability and development and has agreed with the notion of African Solutions to African problems.”

President Tshisekedi said that he welcomed the initiative proposed by Farmajo.

“Advocating African solutions to African problems, the Head of State welcomed  President Mohamed Abdullahi Mohamed’s approach to open up to the AU and to reach out to all Somali stakeholders for a just and lasting peace.”

On April 12, Somalia’s Lower House – or House of the People – voted to extend the federal government’s mandate for two years in a hurried session that barred political opponents from participating. Almost immediately, the legislation was rejected by Somalia’s Upper House and a coalition of opposition leaders, but it was signed into law by President Farmajo nonetheless.

The extension came after weeks of talks between the federal government and regional states on the implementation of the September 17 agreement collapsed. The federal government blamed Puntland and Jubaland for the breakdown in negotiations and said they insisted on meeting with preconditions. Puntland and Jubaland denied that they were the saboteurs and insisted that Farmajo adjourned the meeting without their consultation and that he was politically maneuvering for an extension.

Somalia’s international partners have firmly stated that they would only support the September 17 agreement and heavily criticized Farmajo’s move to extend his mandate. Both the US and the EU said they would consider reassessing their bilateral relationship and placing individuals on sanctions. Somalia accused the international community of leveraging aid as blackmail.

President Farmajo’s trip to Kinshasa is the first since the controversial term extension and could potentially be viewed as a sign to his opponents that he is still recognized as President despite their protest.

Furthermore, Farmajo’s advocacy of African Solutions may be an acknowledgement of his growing rift from traditional Western backers. Before he took off for Kinshasa, Farmajo met with top-level international diplomats that included Ambassadors from the EU, AU, UK and US.

Sources previously reported that the two leaders would discuss Somali-Kenya relations, and although the exact details are unknown, the Foreign Minister confirmed that ‘continental issues’ were discussed. Relations between the two East African neighbours have been fraught but crescendoed last month during an International Court of Justice hearing on a maritime dispute.  It is unclear if Farmajo’s discussed his new ‘African solutions’ policy in this context.

President Farmajo’s trip to Kinshasa may strike many as odd, seeing as Somalia has almost no economic, political or cultural exchange with the DRC, but President Tshisekedi was elected the 2021 African Union Chairperson, and he met with Farmajo in this capacity. The African Union operates the AMISOM peacekeeping mission in Somalia and includes 20,000 soldiers. The drawdown was supposed to happen this year, but it has been pushed back to 2023.