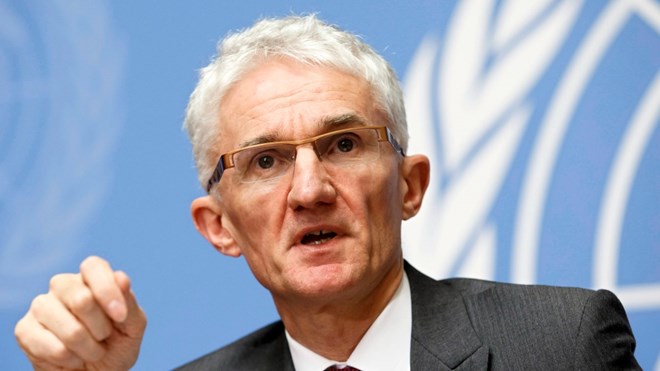 Mark Lowcock, UN Under-Secretary-General for Humanitarian Affairs and Emergency Relief Coordinator, speaks during a press conference at the European headquarters of the United Nations in Geneva, Switzerland on December 4, 2018. THE CANADIAN PRESS/AP, Keystone – Salvatore Di Nolfi

UNITED NATIONS — Despite last year’s UN call for global ceasefires to tackle the COVID-19 pandemic, many conflicts never stopped including in Syria, Yemen and Congo and new ones erupted making it more difficult to control the spread of the virus and care for infected people in many countries, the UN humanitarian chief said Tuesday.

Mark Lowcock stressed the link between conflict, COVID-19, and health care at a virtual Security Council meeting on civilians caught in conflict.Ads By GoogleIn March 2020, as the pandemic was starting to circle the globe, UN Secretary-General Antonio Guterres called for global action “to put armed conflict on lock-down and focus together on the true fight of our lives” against “a common enemy– COVID-19.”

While there were some positive responses, Lowcock said deadly conflicts continued and emerged or got worse including in Ethiopia, Mozambique and between Armenia and Azerbaijan, contributing to a rise in the number of people forcibly displaced in 2020.

Lowcock noted “multiple reports of atrocities” against civilians caught in conflicts during the pandemic.

He singled out the dozens of schoolgirls and civilians killed and injured in an attack on a high school in Afghanistan earlier this month, reports of mass rapes and killings in Ethiopia’s Tigray region, and the just ended conflict between Israel and Gaza’s Hamas rulers that saw over 200 deaths, mainly Palestinians.

During the pandemic last year, he said, the threat of famine re-emerged including in northeast Nigeria, parts of Africa’s Sahel region, South Sudan and Yemen — all conflict areas.

“By the end of 2020, nearly 100 million people faced crisis or worse levels of acute food insecurity as a result of conflict,” he said. “That was up from 77 million the year before.”

Lowcock also cited the impact of conflicts on civilians in urban areas from explosive devices, on farmers from the destruction of agricultural land, and on entire populations from attacks on medical care.

In a two-month period this year, Lowcock said, 109 violent incidents against health care were documented in Myanmar, where a military coup took place on Feb. 1, “accelerating the collapse in the public health-care system when many people needed it most.”

And in Mozambique’s Cabo Delgado province, which has faced attacks from Islamic extremist rebels, over a third of health facilities were damaged or destroyed when hostilities worsened and health workers fled, leaving thousands of people without a nurse or a doctor, he said.

Peter Maurer, president of the International Committee of the Red Cross, cited its recent report “showing the impacts of COVID-19 on communities shouldering the double burden of war and disease.”

“While the need for robust health care systems has perhaps never been greater, paradoxically, health care is under attack,” he said.

Both Maurer and Lowcock urged the Security Council and the broader international community to focus their energy on changing the way combatants behave in conflicts.