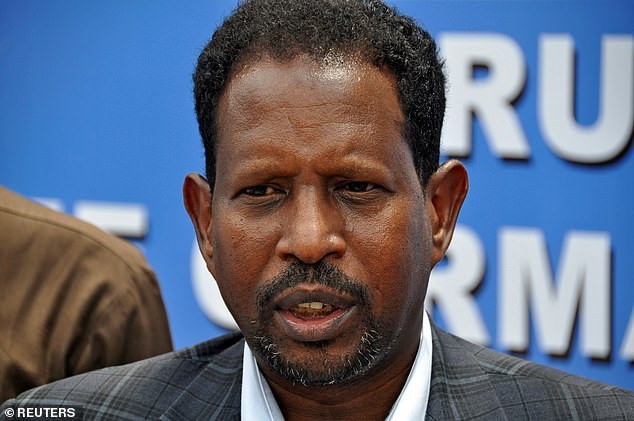 Mogadishu Mayor Abdirahman Omar Osman, at an event in Mogadishu, Somalia, was killed a week after the suicide bombing on July 24

Mayor Abdirahman Omar Osman, who had also previously served as a Labour Party councillor in London, died of his wounds a week after the attack.

He died in a hospital in Qatar.Somalia’s Security Minister said in a statement: ‘Preliminary findings show a female who worked in the local government blew herself up herself with the help of another female, who also worked at the local government.’

It was al Shabaab’s first known use of a disabled person as a suicide bomber and the statement suggested the bomber had used her blindness to get past security and reach the mayor’s offices.

The whereabouts of the blind woman’s co-worker is not known.

A month before the bombing, the two women took leaves of absence from work, the ministry statement said, and visited an area of Somalia controlled by al Shabaab.

‘The female bomber was disabled (blind). She misused the opportunity and acted with enmity against the bosses and the people she worked with,’ the ministry statement said.

Mayor Osman fled as a refugee to Britain after civil war erupted in Somalia in 1991, earned a master’s degree, became a naturalised citizen and worked in the housing department in the London borough of Ealing.

He subsequently returned to Somalia to help rebuild his war-torn homeland in the Horn of Africa.