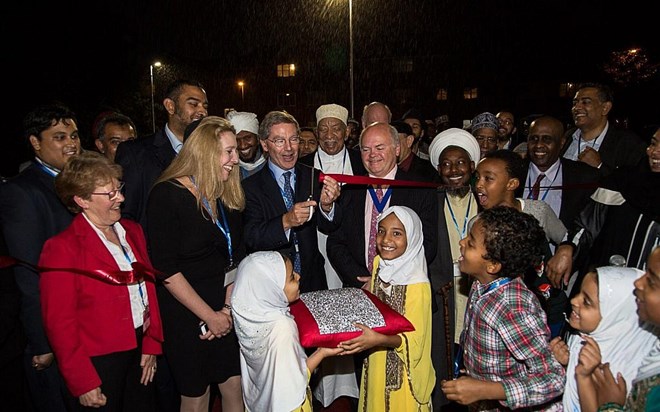 Cutting the ribbon for the new Somali-Bravanese community centre.

Rabbis from across the religious spectrum are joined by faith minister Lord Younger, as the community rallies rounds its Muslim neighbours to inaugurate its new centre

A new London base for the Somali Bravanese Welfare Association was officially opened last night in the presence of local Jews who have supported the community since the arson attack on its former centre six years ago.

Rabbis from across the religious spectrum were among the first to offer support to their neighbours in the wake of the 2013 assault, with Finchley Reform Synagogue hosting Ramadan prayers and annual iftar celebrations following an idea from Citizens UK.

Community members also provided free legal support and were at the forefront of a campaign for the new centre.

Last night, new faith minister Lord Younger cut the ribbon to formally open the facility in East Finchley, telling guests: “What sends the greatest message that hate won’t win are events like today.”The minister – standing in for Communities Secretary Robert Jenrick who was unable to attend due to Brexit business in the House – said the entire country still finds the attack “profoundly shocking” and insisted that no stone go unturned to find the perpetrators who are yet to be brought to justice

Cutting the ribbon for the new Somali-Bravanese community centre.

Rabbis from across the