US in Somalia: Is it still a safe haven for al-Shabab?

US in Somalia: Is it still a safe haven for al-Shabab? 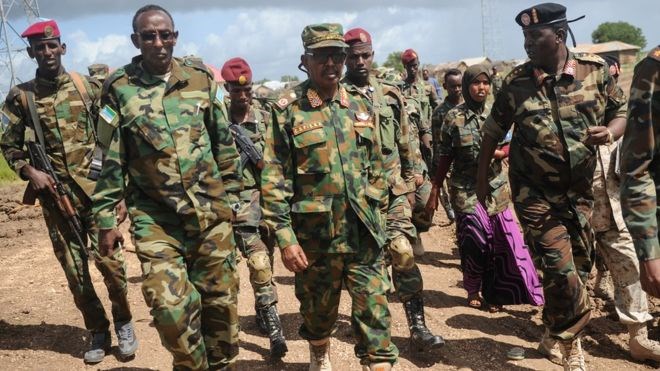 Somali’s national army has been aided by US military intervention

The US recently reopened its embassy in Somalia after 28 years, citing security improvements in the East African nation blighted by conflict for many years.

The announcement came days after a US military base about 90km outside Mogadishu and an EU envoy in the capital were attacked by Islamist militant group al-Shabab.

So has the situation really stabilised?

President Trump’s administration has vastly increased aid and military engagement in Somalia since assuming office in 2017, making it a priority in its global effort to defeat Islamist terrorism and increasing the use of airstrikes and drones to combat militants.This surge has been accompanied by a change in the classification of parts of Somalia to “areas of active hostilities”, which means commanders don’t need high-level approval to conduct strikes.

“Encouraged and supported by the Federal Government of Somalia, precision airstrikes support our partner security forces’ efforts to protect the Somali people from terrorism,” the US military told the BBC. 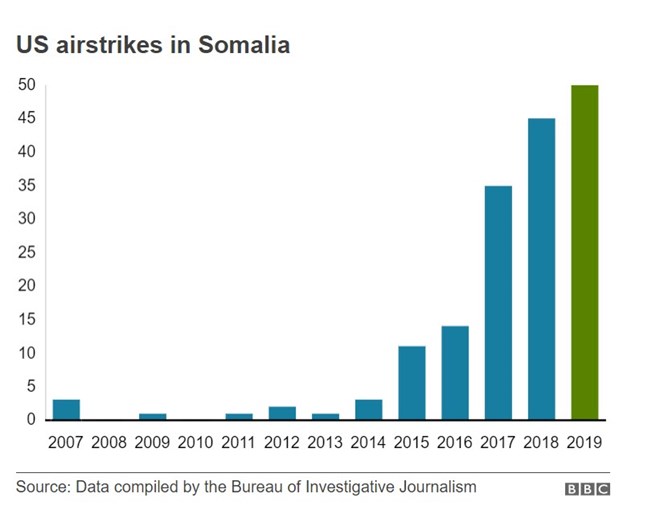 The US military has already conducted more airstrikes in 2019 than in any previous year.

However, while it’s difficult to assess the true impact of airstrikes, experts, former officials and an analysis of local media reporting suggest that the group’s hold on its territory remains strong.

There is also a concern that civilians are being caught up in the conflict. 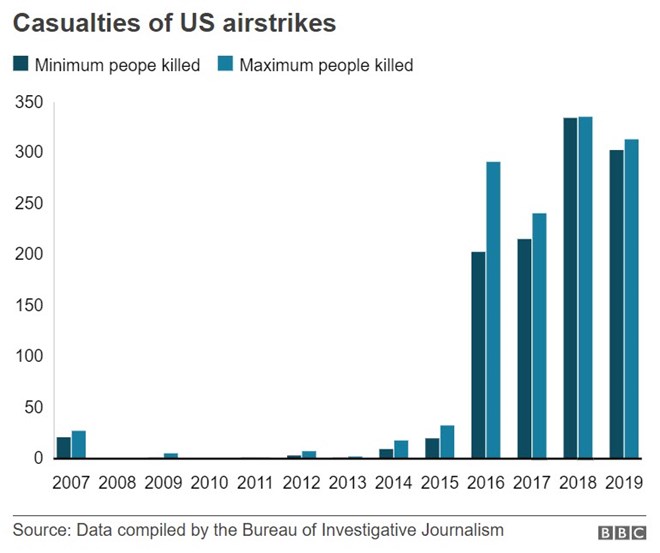 Amnesty International has published findings that the strikes have killed people who are not part of militant groups, although the US military maintains its targets have been al-Shabab militants.

Analysts say that civil society, previously generally supportive of airstrikes, has been strained by the sheer frequency of attacks that are now taking place.

So has the US surge been effective?

Most of these have occurred in Mogadishu and the Lower Shabelle region close to the capital. 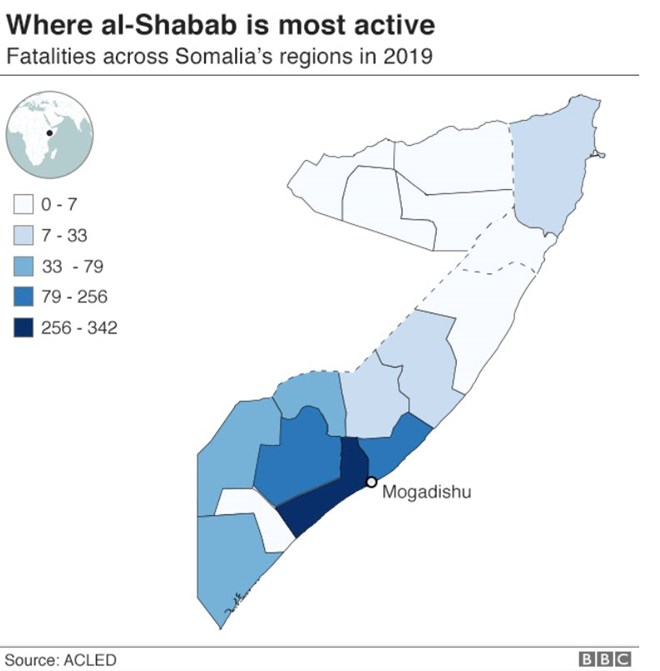 There have been few attacks in the north of the country, although to the north-east, some groups loyal to the so-called Islamic State are active.

In recent years it has changed its approach from direct military confrontation, to destabilisation tactics, such as bombings, raids and assassinations of Somali and international officials.

It has also continued to be successful in generating revenue from local clans, collecting taxes and running courts outside government-controlled areas.

“Al-Shabab has largely been physically removed from most of the main population centres but its influence in cities and towns is possibly increasing once again,” says Michael Keating, the former head of the United Nations Assistance Mission in Somalia (UNSom) from 2016 to 2018. 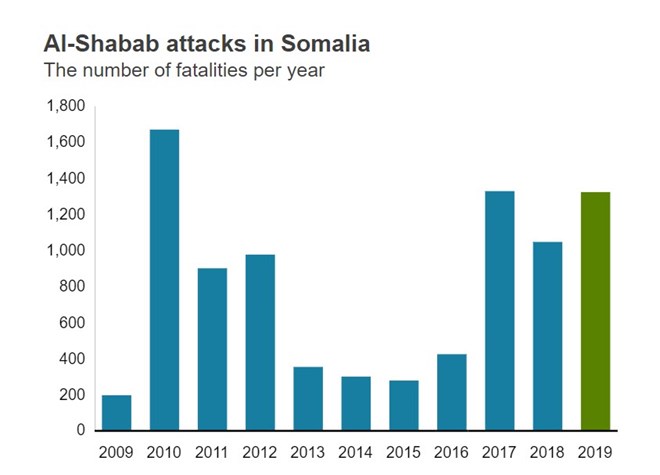 In 2017, over 500 people were killed in one terror attack. The figures for 2019 are the latest available data, and the set includes military and civilian casualties.
Source: Armed Conflict Location & Event Data Project

This indicates that 2019 is already one of the highest years on record for fatalities from al-Shabab attacks.

This is just below the figure for the whole of 2017, during which more than 500 people were killed in one attack in Mogadishu involving two lorry bombs.

The government attributed this attack to al-Shabab, although the group did not confirm it was behind it.

BBC Monitoring’s specialist team monitoring jihadist activity estimates the number of al-Shabab militants to be somewhere in the region of 5,000-7,000.

“You cannot bomb your way to peace in Somalia. If the violence is going to be reduced there clearly needs to be a political process that allows people to talk to each other, rather than just shoot and kill,” says Mr Keating.

A US state department official told the BBC it remained the largest single international donor to Somalia and was committed to stabilisation in the country.