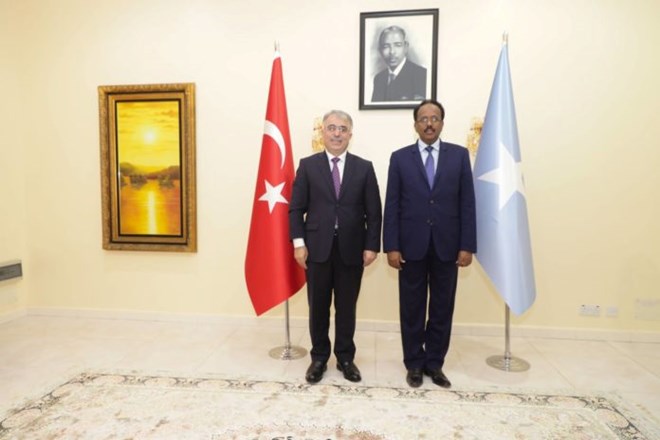 MOGADISHU (HOL) – The Turkish government has invested over a billion dollars in Somalia since 2011, the country’s ambassador in Somalia Mehmet Yilmaz has said noting his country was committed to supporting Somalia.

Ambassador Yilmaz said in an interview with VOA Somali his country’s policy towards Somalia is aimed at enabling the Horn of Africa nation to stand on its feet and depend on itself in future.”Turkey has invested in Somalia $1 billion plus since 2011. Direct budgetary support to the government was $30 million in 2019 and a $100 million cash donation in 2018,” Yilmaz said. “ In the past Somalia’s needs were different, that is why we invested hospitals, roads, schools.”

The Turkish diplomat noted his country is now shifting focus to capacity development. Turkey opened a military academy in Mogadishu in 2017 and currently trains Somali Army officers in various cadres.

According to the recently passed 2020 budget, Turkey is the only bilateral partner expected to chip in and is raising its contribution to $30 million from $15 million last year.

Yilmaz noted his country has no hidden interests in Somalia but only honest support.

“We are trying to build agencies; the institutions that a modern state or government needs, and also infrastructure in both in terms of physical and human capital that Somalia needs to function and to provide public services,” he said.

On allegations by Al-Shabaab that it was targeting Turkish road builders during the bombing in Ex-Control, Mehmet said there will be a clear picture in the coming days.

“In the coming days we’ll have a clearer picture of what the target was and who was targeted. Somali authorities are working on that issue and probably they’ll reach a conclusion and we’ll have a better idea,” he said