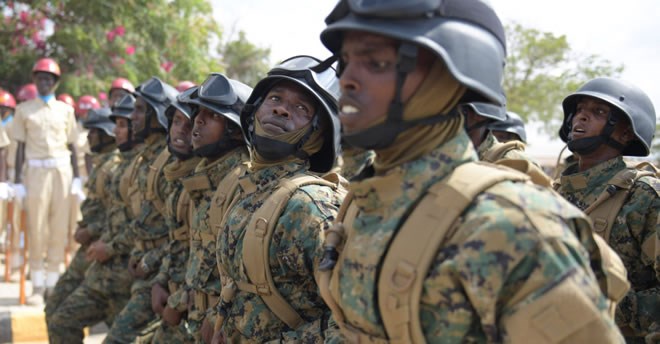 Troops loyal to Somalia’s Federal Government in Mogadishu are not yet ready to stand on their own against al-Shabaab militants in the country’s south, the U.S. Defense Department said in a new report.Despite some successes, the Somali National Army – backed by African Union and U.S. forces – have made little progress in recent months on Operation Badbaado, a joint effort to secure rural areas south of the capital, according to a Pentagon Office of the Inspector General report presented to Congress on Tuesday, February 11.

The assessment comes ahead of a potential limited drawdown of both U.S. and A.U. military forces contributing to the fight against the al-Qaeda-linked Islamist militants who still control swaths of southern Somalia.

It also calls into question the feasibility of U.S. Africa Command’s goal of significantly degrading the militant network’s capabilities by 2021, despite a blistering drone strike campaign and American Special Operations Forces’ assistance on the ground.

The 21,000-strong African Union Mission in Somalia (AMISOM) and some 500 U.S. Special Operations Forces backed by air support have sought to continually weaken the militant network until local Somali Federal Government forces can hold the territory on their own and fill governance needs outside the capital.

AMISOM is set for another withdrawal of 1,000 troops later this month as part of a long-delayed process of turning over control to Somali troops.

U.S. Defense Secretary Mark Esper has said the Pentagon is considering drawing down some of the more than 5,000 troops in Africa in order to focus on countering Russia and China elsewhere.

AFRICOM commander General Stephen Townsend told Congress last month that he believes the U.S. can achieve its counter-extremist objectives in Africa if the current number of American forces is sustained.

“I don’t believe that it’s a whack-a-mole [mission],” Townsend told lawmakers during the budget hearing.Al-Shabaab has fought to establish an Islamic state in Somalia since 2006. The group was largely routed from Mogadishu in 2011 by AMISOM but still controls significant rural areas.

The militants, the report says, still retain effective command and control, “as evidenced by the Fall 2019 synchronized attacks against separate SNA forward operating bases in the Lower Shabelle” region, a Shabaab stronghold.

Though SNA forces successfully defended their new outposts, AFRICOM said they would not have been able to do so without international military support.

“U.S. AFRICOM reported that there was limited impact on degrading al-Shabaab outside of Mogadishu due to slow police force generation and lack of stabilization activities, including local governance, within seized towns in the Lower Shabelle region,” the report reads.

The U.S. aid agency in Somalia relies on subcontractors who “can travel outside of the compound, meet with implementers and beneficiaries, and monitor programming” to evaluate the progress of stabilization projects.

But by May 2020, the report said, only one contractor capable of leaving the airport will remain.

The group claimed responsibility for a massive car bomb in Mogadishu in late December that killed at least 90 people, the worst attack in the capital since 2017. Earlier that month, the militants stormed a Mogadishu hotel frequented by government officials.

In January, Shabaab fighters staged a brazen raid that penetrated the perimeter of Kenya’s air base at Manda Bay, killing ten civilians and one U.S. military member.