Cultural revival in Somalia gets a boost following MoU with UNESCO

Cultural revival in Somalia gets a boost following MoU with UNESCO 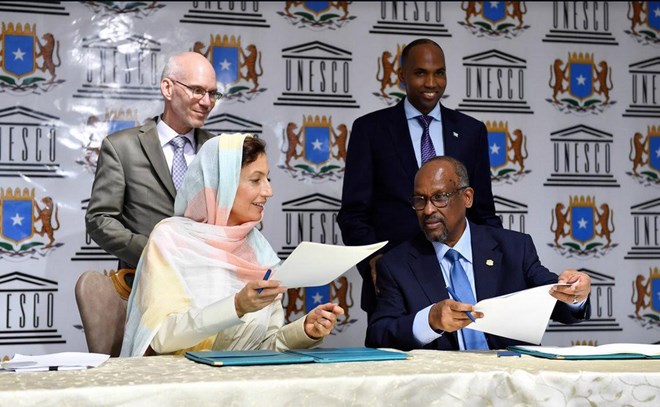 MOGADISHU (HOL) – The culture and education sectors in Somalia which suffered significant damage during the civil war will now get a life-line following a memorandum of understanding inked with the cultural and scientific UN body, UNESCO.

On this first visit to Somalia which saw the signing of the MoU, UNESCO Director General Audrey Azoulay said culture and education formed the core of recovery and stability after years of conflict.
“Culture and education are vital for the country’s future. After years of conflict, they are vital to the human dimension of recovery, of peacebuilding, of sustainability,” Azoulay.

According to a statement from the UN Mission in Somalia (UNSOM), the pact will enable both UNESCO and Somalia to work together on ‘reviving the culture sector in Somalia and enhancing the country’s education policies.’
The development of education polices includes enrolling schoolchildren, with a specific focus on young girls, ensuring free and quality primary and secondary education, as well as making available open digital resources, including textbooks.

Education Minister Godah Barre said the renewed relationship with UNESCO was instrumental in reviving the country’s education and culture sectors.

“UNESCO has not been present in Somalia, but historically, Somalia and UNESCO have a long history, and since our independence, we have collaborated on many fronts. Today, time has allowed us to reignite our relationship with UNESCO. That relationship will directly contribute to our lower and higher education as well as culture, science, and technology,” he said.