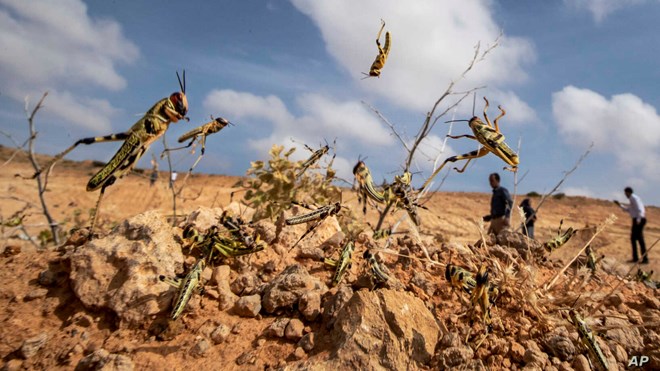 Somali officials say they have deployed helicopters to spray new swarms of desert locusts that are eating crops and threatening the country’s fragile food supply.

In an interview with VOA, Somalia’s Minister of Agriculture Sa’id Hussein Iid said that “hired Canadian experts will engage with the swarms by spraying bio-organic pesticides from the air, using three helicopters.”

Iid said the spraying, which began Thursday, is funded by the U.S. Agency for International Development.

Experts have said the desert locust invasion that began last year is the worst East Africa has seen in at least 25 years. Neighboring Ethiopia also began spraying locust-infested areas this week.“Before we have been conducting hand-spraying and using machines mounted on vehicles, but we have realized that is not enough to fight with the pest and avoid devastation to our pasture and agricultural land,” said Iid.

This aerial spraying will focus on areas in the central Somali region of Galmudug, Puntland in the northeast, and the self-declared republic of Somaliland, the minister said.

But, security experts say, due to conflict and chaos in much of Somalia, there are limits to spraying pesticide by airplane.

“We know there are areas where al-Shabab militant group controls, where a ground co-ordination is impossible. I think this shows the limitation of the power of the government when it comes fulfilling its mandate and responsibilities,” said Hussein Moalim Mohamud, Somalia’s former national security adviser.

Both Somali officials and the international aid agencies have been warning of a  humanitarian catastrophe in Somalia due to combined COVID-19, flooding, and locust which threatens the livestock and the food of millions of Somalis.

In February, the pests traveled to Somalia and were seen flying over land used for grazing animals in a remote part of Somalia, forcing the country to declare a national emergency.

Somalia’s minister of agriculture says the pests have been laying eggs, meaning the swarms could get bigger and spread farther.

“It posed the threat to us, a country in the east Africa region, since December last year, but our particular fear has been the damage it can cause if the situation is not brought under control” before this year’s crops can be harvested, the minister said.

According to the United Nations Food and Agricultural Organization, FAO, desert locusts can travel up to 150km in a day. Each adult insect can eat its own weight in food daily.