US court orders Sudan to pay for 1998 embassy attacks

US court orders Sudan to pay for 1998 embassy attacks 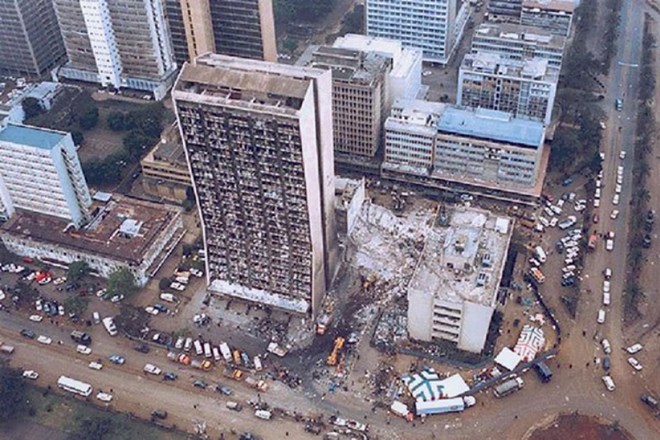 The US Supreme Court on Monday ruled that Sudan must pay hundreds of millions of dollars in punitive damages to some victims of the 1998 attacks on US embassies in Nairobi, Kenya and Dar es Salaam in Tanzania.

The court’s unanimous decision applies only to claims brought by US nationals, members of the US military, and employees of the US government or embassy contractors.

Kenyan relatives of embassy workers or private contractors killed or injured in the bombing are not covered by Monday’s ruling.

A Washington-based attorney representing the 567 plaintiffs, including Kenyans who brought the case, interpreted Monday’s limited ruling as a victory.

“We are deeply gratified that the Supreme Court has validated the right of our clients to receive this measure of compensation,” said attorney Matthew McGill.

“We are hopeful that this soon will lead Sudan to reach a just and equitable resolution with its victims.”

A US attorney representing Sudan estimated that the Supreme Court decision applies to only about 20 per cent of the full $4.3 billion in punitive damages.

“Sudan looks forward to further proceedings in this continuing litigation while it remains engaged with the United States in negotiations to normalise the bilateral relationship,” said attorney Christopher Curran.

It has previously been decided in the US judicial system that Kenyan family members are entitled to some of an additional $6 billion in compensatory damages to be paid by Sudan.

But it is unlikely that the Kenyan families will receive anything close to the full amount of claims for which US courts have already held Sudan liable or might do so in the future.

Sudan’s recently installed reformist government has maintained that the nation’s enormous sovereign debt would prevent it from making good on any multi-billion-dollar settlement arising from the embassy bombings.

But at the same time, Sudan is eager to resolve legal disputes in the US related to the 1998 attack that killed 212 Kenyan nationals and 12 US citizens.

Ten Tanzanians died in the nearly simultaneous bombing of the US embassy in Dar es Salaam.

Outstanding claims against Sudan are among the factors that the US has cited in declining to remove Sudan from a terrorism blacklist.

Erasing that designation, originally made in 1993, would earn Sudan full access to the global financial system.

A US court has found that the Sudan dictatorship of Omar al-Bashir, who was overthrown last year, had assisted al-Qaeda and its leader, Osama bin Laden, in carrying out the embassy bombings.

The new government headed by Prime Minister Abdalla Hamdok denies that Sudan played a role in the attacks.

But the country’s rulers are seeking to negotiate a settlement with victims of the bombing that would be acceptable to the US government.

Monday’s ruling by the US Supreme Court has no bearing on separate lawsuits filed by more than 2,000 Kenyans who were harmed by the bombing but who were not employed by or related to workers at the embassy or for private contracts.

Litigation involving that large group of victims has been stalled in the US court system for several years and is not expected to reach a settlement anytime soon.