Tom Gardner in Addis Ababa
Source: The Guardian, Friday May 29, 2020 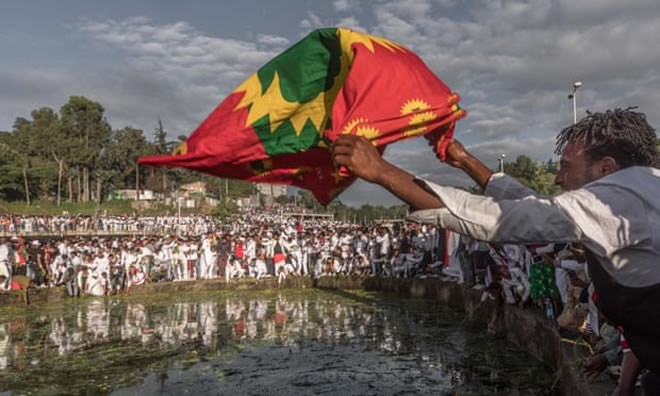 A man waves an Oromo flag as people from the community gather in Addis Ababa in October 2019, on the eve of Irreecha, their thanksgiving festival. Photograph: Yonas Tadesse/AFP

Ethiopia’s Nobel peace prize-winning prime minister Abiy Ahmed has been urged to investigate allegations that state security forces have committed a raft of serious human rights abuses including torture and unlawful killings since he came to power in 2018.According to a report by Amnesty International, published on Friday, Ethiopia’s military and police in its two most populous regions arbitrarily detained more than 10,000 people, summarily evicted whole families from their homes – some of which were burnt and destroyed – and in some cases were complicit in inter-communal violence targeting minorities.

Federal authorities have not responded to the report, which focuses on the period between January and December 2019 in the regions of Amhara and Oromia.

“Given the gravity and the duration [of the period in which abuses were reported] I cannot believe top officials are not aware of what was happening,” the report’s author, Fisseha Tekle, told the Guardian. “And if they are not then it is a dereliction of duty.”

In Oromia, security forces are waging a counter-insurgency campaign against rebels from the Oromo Liberation Army (OLA), an armed guerrilla movement demanding more autonomy for Oromos, which returned from exile in 2018 after Abiy removed it from Ethiopia’s list of terrorist organisations.

The move was part of a package of democratic reforms which won the prime minister widespread acclaim and, along with making peace with neighbouring Eritrea, secured him the Nobel peace prize last year. Shortly after becoming prime minister Abiy also confessed that security officials had in the past committed torture, and promised to ensure the sector was fully accountable in the future.

But the OLA has since returned to armed conflict, and accuses the government of failing to deliver its promises of more democracy and self-rule for Oromos.Fighting in western and southern parts of Oromia has involved targeted killings of local officials and community leaders and what the UN has described as “serious human rights violations”. In Oromia’s Guji district the unrest had driven 80,000 people from their homes by the start of this year.

Amnesty said it had a list of 39 people suspected of supporting the OLA who had been unlawfully executed in two parts of Guji since January 2019. It also said that on a single day in December 2018, soldiers from the federal military killed 13 people in the town of Finchawa in West Guji. One of those killed was an old woman selling milk on the street, according to an eyewitness who spoke to Amnesty.

Security forces are estimated to have detained more than 10,000 men and women suspected of supporting or working for the OLA, among other abuses documented by the organisation.

Many were detained for several months without being charged, in violation of both national and international human rights laws, under conditions which at times amounted to torture, the report found. Detainees were made to undergo two months of “training” in subjects such as constitutionalism, the rule of law and the history of the Oromo people’s struggle.

In Amhara, according to the report, regional police, militia and local vigilante groups engaged in targeted attacks on ethnic Qemant, a minority group demanding more autonomy, in inter-communal violence which resulted in at least 130 deaths last year. In January 2019, at least 58 people were reportedly killed in less than 24 hours and buried in mass graves.

Nobody has yet been held accountable for the atrocity.

Amnesty said it had sought responses to its findings from nine government offices including the defence ministry and the attorney-general’s office but had only received a response from Amhara’s regional security bureau, which denied that state security forces had been involved in any atrocities.

The rights group called on the government to carry out full investigations into human rights violations and to order security forces to stop carrying out unlawful executions, arbitrary arrests and detention, as well as forced evictions and destruction of property belonging to people suspected of supporting opposition political parties or armed groups.

In February last year the former head of the Ethiopian army said it had embarked on “deep institutional reform” as part of the democratic changes sweeping the nation.

The head of the Ethiopian Human Rights Commission, Daniel Bekele, told the Guardian: “While the Amnesty findings and ongoing reports of killings and arrests in parts of Oromia region should be taken seriously and fully investigated, it is also important to understand the complex nature of the security operations where armed groups are seriously destabilising the affected areas.”

The prime minister’s office said it would put the Guardian’s request for official comment to the peace ministry, which was declined.