The African continent is very slowly peeling apart. Scientists say a new ocean is being born.

New satellite measurements are offering valuable tools to study the tectonic rift in one of the most geologically unique spots on the planet. 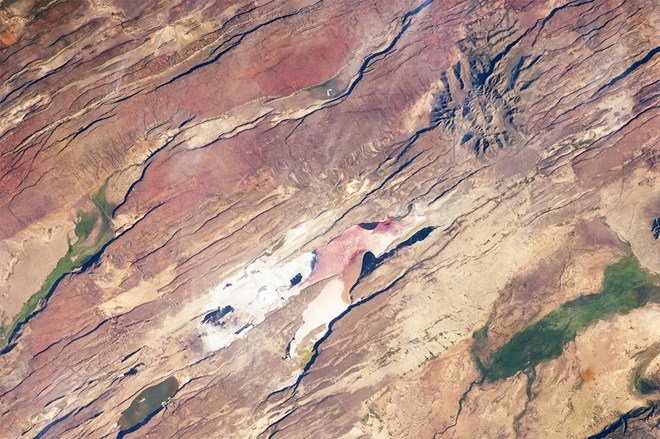 Astronauts aboard the International Space Station captured this photo in 2012 of the East African Rift Valley, a region where tectonic plates are peeling apart.NASA

In one of the hottest places on Earth, along an arid stretch of East Africa’s Afar region, it’s possible to stand on the exact spot where, deep underground, the continent is splitting apart.

This desolate expanse sits atop the juncture of three tectonic plates that are very slowly peeling away from each other, a complex geological process that scientists say will eventually cleave Africa in two and create a new ocean basin millions of years from now. For now, Today, the most obvious evidence is a 35-mile-long crack in the Ethiopian desert.

The African continent’s tectonic fate has been studied for several decades, but new satellite measurements are helping scientists better understand the transition and are offering valuable tools to study the gradual birth of a new ocean in one of the most geologically unique spots on the planet.

“This is the only place on Earth where you can study how continental rift becomes an oceanic rift,” said Christopher Moore, a Ph.D. doctoral student at the University of Leeds in the United Kingdom, who has been using satellite radar to monitor volcanic activity in East Africa that is associated with the continent’s breakup.

It’s thought that Africa’s new ocean will take at least 5 million to 10 million years to form, but the Afar region’s fortuitous location at the boundaries of the Nubian, Somali and Arabian plates makes it a unique laboratory to study elaborate tectonic processes.

Earth’s crust is made up of a dozen large tectonic plates, which are irregularly shaped, rocky slabs that constantly mash against, climb over, slide under or stretch apart from one another.

For the past 30 million years, the Arabian plate has been moving away from Africa, a process that created the Red Sea and the Gulf of Aden between the two connected landmasses. But the Somali plate in eastern Africa is also stretching away from the Nubian plate, peeling apart along the East African Rift Valley, which extends through Ethiopia and Kenya.

But there are still some big unknowns, including what is causing the continent to rift apart. It’s thought Some think that a massive plume of superheated rocks rising from the mantle beneath East Africa could be driving it. the region’s continental rift.

In recent years, GPS instruments have revolutionized this field of research, allowing scientists to make precise measurements of how the ground moves over time, said Ken Macdonald, a marine geophysicist and professor emeritus at the University of California, Santa Barbara.

“With GPS measurements, you can measure rates of movement down to a few millimeters per year,” Macdonald said. “As we get more and more measurements from GPS, we can get a much greater sense of what’s going on.”

Detailed satellite observations combined with additional field research could also help scientists piece together what is happening underground in the Afar region. But if the area is a living laboratory to study continental rift, the environment doesn’t make it easy.

“It has been called Dante’s inferno,” said Cynthia Ebinger, a geologist at Tulane University in New Orleans, who has conducted numerous field research campaigns in the Afar region. “The hottest inhabited town on the Earth’s surface is in the Afar. Daytime temperatures often go to 130 degrees Fahrenheit and they cool off to a balmy 95 degrees at night.”

Some of Ebinger’s research in the field focused on a giant, 35-mile crack that opened up in the Ethiopian desert in 2005. The violent split was equivalent to several hundred years of tectonic plate movement in just a few days, she said.

Since then, Ebinger’s work has zeroed in on what triggers these extreme events. Her research suggests that the rifting process isn’t always smooth and steady but can sometimes be defined by intense jerks along the way.

“We’re trying to understand the straw that breaks the camel’s back,” she said.

Ebinger thinks built-up pressure from rising magma could be triggering the explosive events seen in the Afar region. She likened the scenario to overfilling a balloon and creating so much tension on the outer surface that it doesn’t take much to relieve the pressure and cause the balloon to pop.

Over time, these rifting events will reshape the African continent.

Each plate boundary in the Afar region is spreading at different speeds, but the combined forces of these separating plates is creating what’s known as a mid-ocean ridge system, where eventually a new ocean will form.

“The Gulf of Aden and the Red Sea will flood in over the Afar region and into the East African Rift Valley and become a new ocean, and that part of East Africa will become its own separate small continent,” Macdonald said.

The rifting process may be happening at a glacial pace, but researchers say there are clear signs that this transition is taking place. As the plates peel apart, material from deep inside Earth moves to the surface and forms oceanic crust at the ridges.

“We can see that oceanic crust is starting to form, because it’s distinctly different from continental crust in its composition and density,” Moore said.