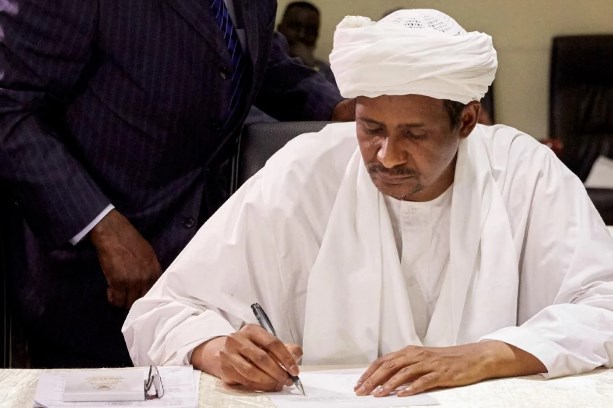 A peace agreement between Sudanese leaders and a coalition of rebel groups was formalised at a ceremony in neighbouring South Sudan on Monday.

Both civilian Prime Minister Abdalla Hamdok and the military’s General Abdel Fattah al-Burhan attended the ceremony in Juba, where negotiations have been held over the past year.

The agreement was initialled by the Sudan Revolutionary Front (SRF), an umbrella organisation of rebel groups from various Sudanese conflict zones, but was not fully signed as two key groups had not added their signatures.

An AFP correspondent said that the SRF had raised their fists in celebration after inking the deal.

However, an SLM faction led by Abdelwahid Nour and a wing of the SPLM-N headed by Abdelaziz al-Hilu refused to take part.

Darfur has been devastated since 2003 by a conflict that has left 300,000 people dead and 2.5 million others displaced, according to the United Nations.

The conflict in South Kordofan and Blue Nile erupted in 2011, following unresolved issues from bitter fighting there in Sudan’s 1983-2005 civil war.

A new wave of violence has gripped the Darfur region in recent months, claiming 100 lives in July alone, despite a short lull in the unrest after the 2019 Sudanese revolution that ousted longtime president Omar al-Bashir.

The rebel groups are largely drawn from non-Arab minority communities that have long railed against Arab domination of successive governments in Khartoum.

Rebels fought against troops deployed by the now-toppled Bashir, who is wanted by the International Criminal Court (ICC) over charges of genocide and crimes against humanity in the conflict.

After Bashir was overthrown, the transitional government led by Hamdok has made peacemaking with the rebels one of its top priorities.