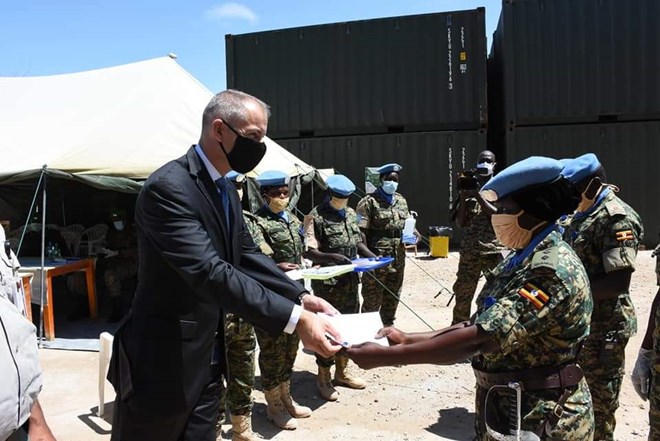 MOGADISHU – The Secretary General of the United Nations has awarded medals to over 600 Ugandan Officers and Militants serving under the sixth United Nations Guard Unit (UNGU VI) in Somalia. The medals are a recognition of the one-year selfless service by the Officers and Militants in securing the UN facilities and personnel against Al-Shabaab threats.

The function was presided over on telecast by the Special Representative of the Secretary General (SRSG) in Somalia, His Excellency James Swan.

The SRSG applauded the Peacekeepers for exhibiting a high level of professionalism during their just ended tour of duty and appropriately representing their country in the UN mission. He specifically recognized the manner in which UNGU VI dealt with the recurring challenge of Al-Shabaab’s indirect mortar fires directed on the UN facilities in Mogadishu. He also hailed the blue berets for their ability to adjust to other extraordinary challenges like the COVID-19 pandemic.“I want to thank UNGU VI who have been collaborative in ensuring that they have kept everyone safe through the pandemic,” he said, and added that, “In addition to your personal contributions, you have been good ambassadors of Uganda and the Uganda Peoples’ Defence Forces.”

The General further thanked and wished the peacekeepers well. “UNGU VI, I wish you well and please convey our regards to your families, because without those families you would not have reached where you reached,” said Gen Lakara.

The Deputy Sector One Commander who is also the Deputy Commander of Uganda’s Contingent in Somalia, Col John Winston Mugarura said the Gurad Unit had fulfilled their mission. “Overall, you have delivered on your tasks ably well and I therefore congratulate you all,” he said.

The Guard Unit was commanded by Lt Col Nathan Bainomugisha who thanked members of his unit for their selfless service. “To all of you our nationals and international partners, I thank you for working selflessly as a team. More heads work better than one,” he observed. The Commanding Officer also applauded the UPDF Leadership in Uganda for the continued guidance and support to Officers abd Militants keeping peace in Somalia.

Present at the function was the UN Principle Security Advisor, Mr. Andrew Rigg, UN Officials and Officers from both the Headquarters of the African Union Mission in Somalia (AMISOM) and Sector One.