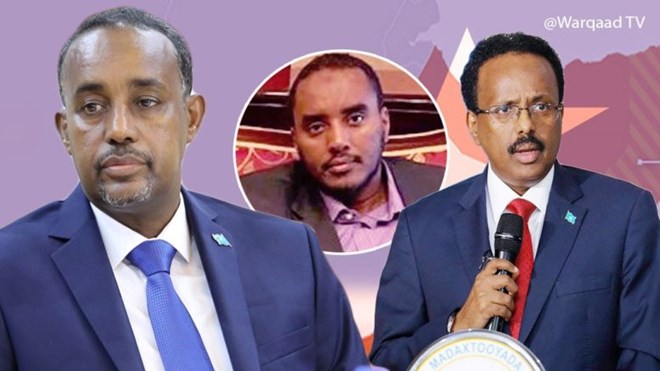 “The decision of the Prime Minister of the Federal Government of Somalia, His Excellency Mohamed Hussein Roble, is illegal and unconstitutional.”

The decree also reinstated Fahad Yasin as the director of the National Intelligence & Security Agency (NISA).

The decree from Villa Somalia came just hours after PM Roble dismissed Fahad over his agency’s handling of the disappearance of Ikran Tahlil.

President Farmajo instructed NISA to present the National Security Council (NSC) with its report at the next meeting. The President did not give a specific date on when that meeting would be held. He also directed PM to continue managing the upcoming elections.

“The President of the Federal Republic of Somalia instructs Prime Minister Mohamed Hussein Roble and the Council of Ministers to fulfill their responsibility to complete the electoral process effectively.”

President Farmajo conceded the election management duties to PM Roble in early May after intense domestic and international pressure forced the President to walk back an attempt to extend his mandate by two years.

The Council of Presidential Candidates supported the PM’s dismissal of Fahad Yasin as the head of NISA, accusing Farmajo of prioritizing his personal relationship with the spy chief over his duties to protect the constitution.

Both leaders have cited the same articles in Somalia’s Provisional Constitution to legally justify their actions.

It is not the first time PM Roble has directly clashed with the President over his legal powers and duties. In early August, the PM rebuffed a presidential decree issued by Farmajo that ordered all federal government officials to disengage from any agreements until a new government was seated.

Both Somalia’s President and its Parliament are without a constitutional mandate.

The PM ordered his cabinet to proceed with business as usual.

Observers worry whether this latest twist could trigger a second constitutional crisis in 2021.