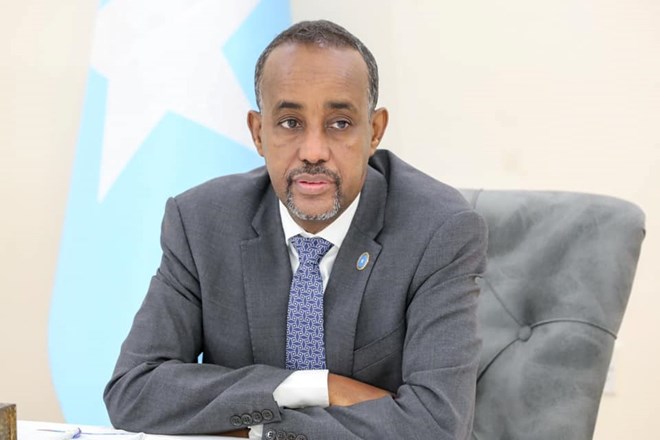 Mogadishu (HOL) – Prime Minister Mohamed Hussein Roble has issued a new directive to the Somali finance ministry on Sunday not to disburse any funds without his consent during this transition period.

In a letter addressed to the heads of the Ministry of Finance, the  Central Bank Governor, and the National Treasurer, the Prime Minister instructed the ministry not to disburse any funds from the treasury without his signature.advertisements

The PM cited the IMF’s recent Special Drawing Rights (SDR) allocation – unprecedented in history- as the key motivator in his decision.

“Given the country’s transition and the need to pay more attention to the DDS disbursement process and the use of the IMF’s SRD’s, the FGS Prime Minister instructed the Ministry of Finance and those addressed in this letter that no expenses, of any kind, may be made without the consent of Somali PM.”

Somalia was allocated $US156.6 million worth of SDRs under the IMF plan to boost liquidity in the global financial system.

The Prime Minister said that the Ministry of Finance could not withdraw any funds from Somalia’s allocation of IMF funds without his approval. He added that his office must clear all major expenses before approval.

“The salaries of soldiers and personnel, military rations, projects and any other expenses necessary for the service of the government, when the officials of the Ministry of Finance have performed their duties, must be approved by the Prime Minister before the ministry can make any payment.”

The letter ordered those addressed in the letter to “act accordingly,” noting that his directive would be in effect immediately and would be lifted at the end of the transition period.

The SDR is an international reserve asset created by the IMF in 1969 to supplement other reserve assets of member countries. The value of an SDR is based on a basket of the world’s five leading currencies – the US dollar, euro, yuan, yen and the UK pound. While it can’t be used as money, countries can trade their SDRs for hard currencies with other, typically wealthy, IMF members. SDRs are the IMF’s official unit of exchange.

The largest allocation of SDRs, equivalent to about US$650 billion, became effective on August 23.

The new SDRs were credited to IMF member countries in proportion to each country’s participation in the IMF capital. The amount typically correlated to their economies’ size.

The SDR allocation is not a loan and can be used freely to weather the global financial storm caused by the COVID-19 pandemic. The IMF’s Managing Director, Kristalina Georgieva, said it would provide regular updates on all SDR holdings, transactions, and trading to ensure accountability and transparency.

This latest directive comes on the heels of a failed meeting between the PM and the President aimed at solving the current constitutional crisis.

The PM chaired an NCC meeting on Sunday with Amina J Mohammed, the Deputy Secretary-General of the UN, to discuss the latest political standoff, the elections and the “peaceful and legitimate transition of power.”

The President also met with Mohammed during a meeting in Villa Somalia. Farmajo said that they discussed Sustainable Development Goals and the need for timely and inclusive polls.

Roble had previously warned that budgeting for the upcoming elections was scarce and was at the top of the agenda during last month’s NCC meeting between the Prime Minister and Somalia’s Federal Member States’ leaders. 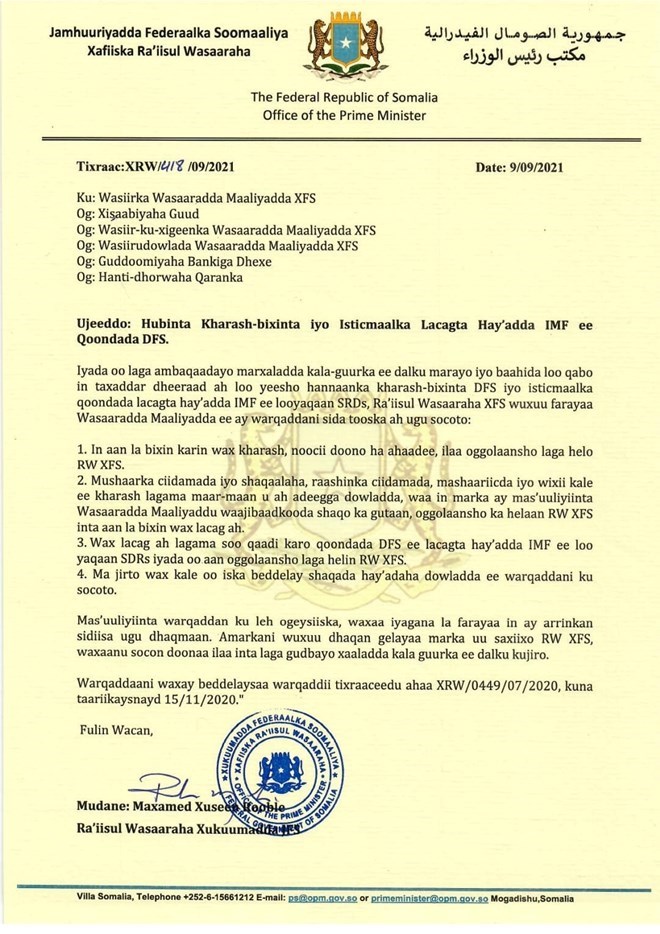