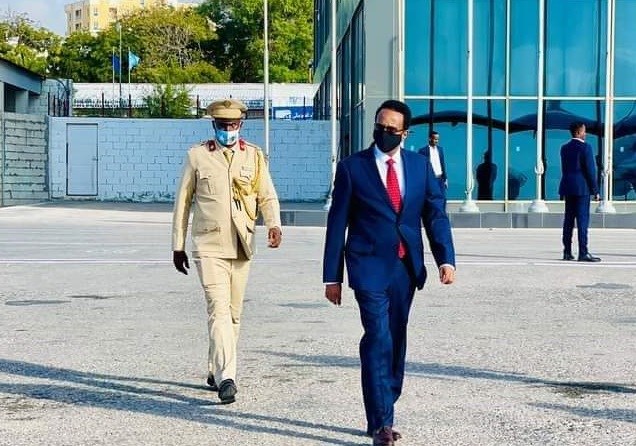 The president’s communication director, Abdirashid Hashi, confirmed Farmajo’s departure in a tweet.advertisements”President Farmajo has departed Mogadishu for Addis Ababa today to participate in the inauguration ceremony to form the new Ethiopian government. During the visit, the President will participate in the inauguration ceremony and meet with H.E. PM Abiy Ahmed.”

Farmajo was one of the first world leaders to offer his congratulatory message to Abiy Ahmed after the official results were announced in early July.

Farmajo will join Nigeria’s President, Muhammadu Buhari – who arrived on Sunday – along with other world leaders and foreign dignitaries to the ceremony.

The Ethiopian government has not published an official guest list.

Elections in Ethiopia were initially scheduled for August 2020, but Ethiopia’s parliament voted to postpone the election due to the COVID-19 pandemic.

In June, Ahmed’s Prosperity party was handed a resounding victory, winning 410 out of a possible 419 seats in Ethiopia’s federal parliament. However, the election was overshadowed by civil war in the Tigray region that has killed tens of thousands of people and has spilled out into other provinces. The conflict is irreparably damaged the once Nobel Price winner’s peacemaking credentials.

Addis Ababa sees Somalia’s President as a close ally and indispensable to Abiy’s broader political objectives in the region. The two leaders and Eritrean strongman Isaias Afwerki formed The Tripartite Agreement in September 2018 to strengthen economic and security ties in the Horn of Africa.

The agreement was initially lauded as a success by the international community, including the U.N. and the E.U.

It is not clear if the three will reunite in Addis Ababa on Sunday. There is no confirmation that Afwerki will attend Abiy Ahmed’s inauguration ceremony as his reclusive Eastern African nation is typically tight-lipped about foreign travel. Afwerki has travelled to Ethiopia in the past for meetings and similar high-profile events. Both Afwerki and Ahmed have come under intense international criticism for atrocities in the Tigray region. Ethiopia’s government initially denied that Eritrean troops were involved in the fighting against TPLF rebels, but Abiy Ahmed admitted to Ethiopia’s parliament in March Afwerki’s troops crossed over their border to fight alongside Ethiopia’s military.

Somalia has also been fingered as a possible belligerent in the Tigray war by the U.N.’s Human Rights Council in early June. The report alleged that Somali soldiers fought in Tigray alongside Eritrean troops, including accounts that the Somali forces had been involved in the intense fighting around Axum, where hundreds of civilians were massacred.

Reports that Eritrea had trained a covert force of Somali soldiers then sent them to fight in Ethiopia’s civil war reverberated across Somalia and caused outrage, despite Somalia have a notable history of training its forces abroad.

The Families of the soldiers protested in Mogadishu, Guriel and Galkayo, demanding answers from Somalia’s government. The anger was directed to Somalia’s intelligence agency which allegedly ran the recruitment, transport and training process.

Somalia’s latest constitutional crisis  – which also has its roots in the Tigray conflict – began when a power struggle erupted in early September following the PM’s sacking Farmajo’s close confidante and nation’s spy chief Fahad Yasin for his reluctance to provide a report on the abduction and killing of Ikran Tahlil, a cyber security expert employed with NISA. Farmajo vehemently protested the firing but capitulated days later.

Several sources have revealed that Ikran may have been in possession of a ‘secret list’ that contained the names of the soldiers fighting in Tigray, although this has not yet been independently confirmed. A military tribunal has been tasked with investigating Ikran’s murder and hold those responsible to account.

Abiy Ahmed’s new term will see him govern Africa’s second-most populous nation for an additional five years. In that time, he will have to contend with the ongoing civil war and renewed international tensions against Sudan and Egypt over water rights in the region.

Abiy Ahmed will also have to fend off international criticism of his administration, which as grown significantly since his meteroic rise to power in April 2018. The U.N.’s Secretary-General Antonio Guterres criticized Ahmed this week following the expulsion of 7 U.N officials from Ethiopia. Ethiopia accused the officials of “meddling” in its affairs and giving them 72 hours to leave.