US tells citizens to consider leaving Ethiopia as rebels advance

US tells citizens to consider leaving Ethiopia as rebels advance 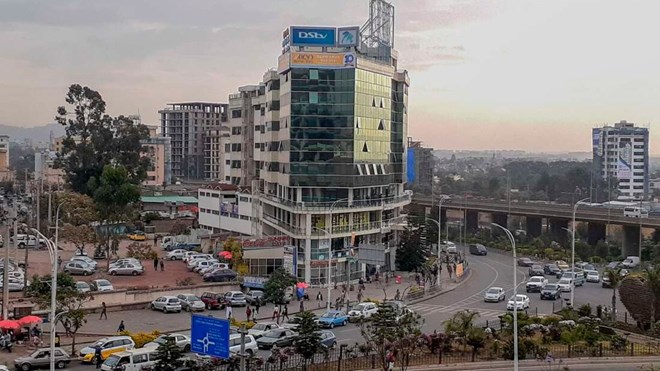 The US embassy in Ethiopia has urged its citizens to consider leaving the country.

The warning comes on the day Ethiopia declared a state of emergency as the Tigray People’s Liberation Front (TPLF) rebels captured more territory in the northern region.

The US embassy has also restricted its staff from travelling outside Addis Ababa city limits.advertisements

“We strongly suggest that US citizens seriously reconsider travel to Ethiopia and those who are currently in Ethiopia consider making preparations to leave the country,” it said in a statement.

“The security environment in Ethiopia has deteriorated significantly in the last several days with a continued escalation of armed conflict and civil unrest in Amhara, Afar and Tigray. A significant portion of the A2 highway connecting Addis Ababa with cities to the north has been restricted by Federal authorities which has led to disruptions, stranded travelers, and a generally non-permissive travel environment,” the US embassy cautioned.

Ethiopia has ordered residents of Addis Ababa to prepare to defend their neighbourhoods amid fears that Tigrayan rebels were heading for the capital.

This came after several days of reported advances by the Tigray People’s Liberation Front (TPLF) rebel group, which is locked in a brutal year-long war against Prime Minister Abiy Ahmed’s government.

“The state of emergency is aimed to protect civilians from atrocities being committed by the terrorist TPLF group in several parts of the country,” state-affiliated Fana Broadcasting Corporate reported.

Possible restrictions include a curfew, road closures and searches of “anyone suspected of collaborating with terror groups”, Fana said.

The measure also allows the authorities to conscript “any military age citizen who has weapons” or suspend any media outlets believed to be “giving moral support directly or indirectly” to the TPLF, Fana said.

Lawmakers were expected to approve the state of emergency within 24 hours, it added.

“All residents must be organised by blocks and neighbourhoods to protect peace and security in their home area in coordination with security forces, who will coordinate activities with community police and law enforcers,” said Kenea Yadeta, chief of the city’s Peace and Security Administration Bureau.

He also said young residents would be recruited to work with law enforcement, and that “all sections of society” must cooperate with efforts to increase vigilance, for example landlords and hotel owners checking IDs of tenants and guests.

Abiy sent troops into Tigray a year ago to detain and disarm the TPLF, in response, he said, to the group’s attacks on army camps.

The 2019 Nobel Peace laureate promised a swift victory, but by late June the rebels had regrouped and retaken most of Tigray.

They then launched offensives into the neighbouring regions of Afar and Amhara.

In recent days the TPLF has claimed control of two key cities in Amhara, about 400 kilometres (250 miles) north of Addis Ababa.

TPLF leaders have not ruled out marching on the capital, which has so far not seen any fighting.

The government has denied claims of TPLF territorial gains which, if confirmed, would represent a major strategic advance.

Much of northern Ethiopia is under a communications blackout and access for journalists is restricted, making battlefield claims difficult to verify independently.

A separate rebel group, the Oromo Liberation Army (OLA), has also boasted of recent advances in Amhara and in the Oromia region surrounding Addis Ababa.

The international community has expressed alarm at the expanding conflict, with Western powers reiterating calls for an immediate ceasefire and for the African Union to broker peace talks between the warring parties.

The US embassy published an advisory late Tuesday suggesting citizens reconsider travelling to Ethiopia and that “those who are currently in Ethiopia consider making preparations to leave the country”.

The fighting has already killed thousands and forced hundreds of thousands into famine-like conditions, according to the UN.

Jeffrey Feltman, US special envoy for the Horn of Africa, said on Tuesday that Washington opposed “any TPLF move to Addis or any TPLF move to besiege Addis”, and that officials had conveyed that message to the rebels.

Separately US President Joe Biden said his government would remove Ethiopia from a vital trade pact due to human rights concerns related to the war.

Ethiopia, which in recent weeks had lobbied to stay in the programme, known as the African Growth and Opportunity Act, said it was “extremely disappointed” by Biden’s decision and called for its reversal.