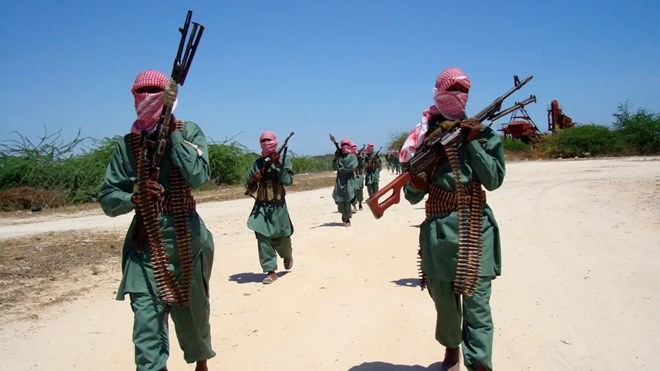 File photo of al-Shabaab militants on the outskirts of Mogadishu. (Reuters)

Mogadishu (HOL) – Al-Shabaab fighters in the Middle Shabelle launched an attack on African Union soldiers on Tuesday morning, according to officials and residents.

The attack began with a large explosion, likely from a car bomb, targeting an ATMIS forwarding base in El Baraf, a town  130 km (80 miles) to the north of Mogadishu.

A local elder said that he was awoken by the massive blast, followed by heavy gunfire.

‎The ATMIS troops stationed in the attacked base are from the Burundi contingent.

‎There are unconfirmed reports that up to four soldiers from the Somali National Army soldiers were killed in the fighting, and another five were seriously wounded.

‎Al-Shabaab claimed responsibility for the early morning attack. In a statement sent to their media affiliates, the Al-Qaeda linked group claimed to have killed dozens of African Union troops and surrounded the base.

“The Mujahideen launched a pre-dawn raid on an ATMIS (African Union Mission) military base in El-Baraf, middle Shabelle region,” al Shabaab said. After a fierce firefight, the Mujahideen managed to overrun the base and are now in complete control of the entire military base.”

There has been no official comment yet from the African Union.