Foreign dignitaries begin to arrive in Mogadishu ahead of presidential inauguration

Foreign dignitaries begin to arrive in Mogadishu ahead of presidential inauguration 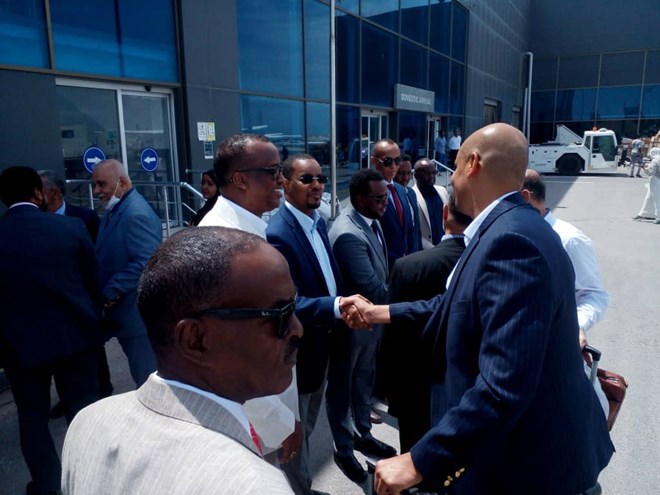 Mogadishu (HOL) – Diplomats and foreign dignitaries have begun to arrive at Aden Adde International Airport in Mogadishu on Tuesday ahead of Hassan Sheikh Mohamud’s presidential inauguration later this week.

A delegation of Somali ministers was present at the airport to receive the guests.

HOL has learned that Kenyan President Uhuru Kenyatta, Ethiopian Prime Minister Abiy Ahmed and Djibouti President Ismail Omar Geelle, are the world leaders who have been confirmed to be attending the presidential inauguration on Thursday.‎

President Mohamud has promised a more balanced attitude to foreign relations and campaigned on promises of “no retaliation,” in stark contrast to former President Farmajo’s aggressive approach has isolated Somalia from historical friends.

Eritrea and Qatar are expected to send a delegation.

The top brass of Somalia’s security sector held a meeting on Tuesday to address the security challenges for the inauguration ceremony. Omar Mohamud Mohamed (Omar Filish), the mayor of Mogadishu, chaired the meeting, which was attended by the Minister of Security of the Federal Government of Somalia, the Commander of the Somali Police Force, the Commanders of the General Police and Security along with station officers and Banadir District Commissioners.

Many of the main thoroughfares through Somalia’s capital have been sealed off this morning, as residents reported seeing a dramatic uptick in police and armoured vehicles in the street.

Some of the roads closed on Tuesday are Maka Almukarama, Military Hospital, KM4 roundabout, Zobe junction and October 21st Road.

Residents say that the roads are also closed to pedestrian foot traffic.

Hassan Sheikh Mohamud was elected Somalia’s President for the second time in a decade on May 15, defeating incumbent Mohamed Abdullahi Farmajo in a landslide during the final round of voting.