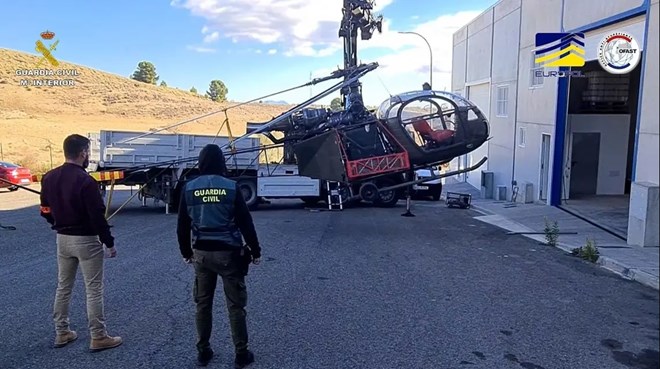 In this handout image released by Guardia Civil on January 9, 2022 a helicopter used to smuggle drugs is loaded on a truck by police after being seized in Torremolinos, Spain. (AFP)

Spain’s Guardia Civil police said Wednesday they had made Europe’s biggest seizure of substances derived from the khat plant, confiscating more than 3.2 tonnes of synthetic cathinones at Barcelona port.

The product is a derivative of a stimulant found in the leaves of the khat plant, which is native to the Horn of Africa and the Arabian Peninsula.advertisements“The Guardia Civil has seized the biggest quantity of synthetic cathinones found in Europe to date,” a police statement said.

“They seized a total of 3.2 tonnes of this substance, which on the market would fetch 61 million euros ($65 million),” it added.

Images released by the police showed dozens of blue plastic drums used to transport the crystal-like substance, which commonly goes by the name “bath salts.”

Khat, or qat, is a mildly narcotic leaf which is packed into the cheek and slowly chewed, releasing chemicals similar to amphetamines and resulting in a mild high.

It is very popular in Yemen and Horn of Africa countries like Ethiopia and Somalia.

Its synthetic variants, however, are “more potent than the natural compound and much more dangerous,” the Guardia Civil warned.

The investigation began at the start of the year after an operation in France uncovered a possible storage location at Barcelona port, where the drugs were shipped out to other countries in Europe.

By falsifying customs certificates and working through three companies, the international ring running the operation was able to move a large quantity of the product, police said.