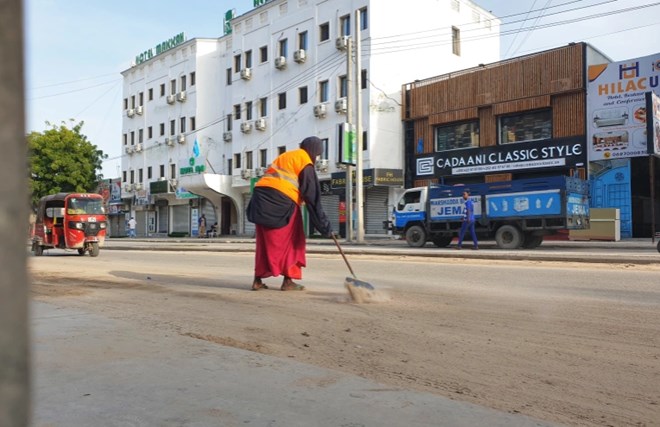 At night or early morning, female street cleaners say they do not like to wear high visibility jackets as that can attract robbers [Hamza Mohamed/Al Jazeera]

Mogadishu, Somalia – It is an hour before sunrise in downtown Mogadishu. The Somali capital is fast asleep with eerie silence hanging in the warm salty air blowing from the Indian Ocean.

Apart from a small group of women wearing dark-coloured clothes and flip-flops on Maka al-Mukarama road in the heart of the city, there is no other soul in sight. With few street lights working, the women blend almost perfectly into the pre-dawn darkness.

Each is carrying a plastic broom, a shovel and sack, and works about 300m (984 feet) away from the other. They barely make any sound as they get to work.advertisements“It is best not to be seen for your own safety,” one of them, 50-year-old Maryan Salad Mohamed, told Al Jazeera. “We do our best not to be seen and even better if no one hears us. There are many dangers when you do our job.”

Maryan and the others are street cleaners working for the city’s local authority – one of the most dangerous jobs in the Somali capital.

“Before I leave the house I pray. You don’t know if you will come back alive,” the mother-of-seven, told Al Jazeera in a low, soft voice.

There is no official count for the number of street cleaners who have lost their lives in the line of duty. But for years, the city has lost dozens of street cleaners due to Improvised Explosive Devices (IEDs) hidden in rubbish left on the side of the streets.

And in a gruesome attack in February 2019, unknown gunmen shot dead nine street cleaners, including six women at a location some 15km (9 miles) from the city centre.

The group, which wants to impose a strict interpretation of Sharia law in Somalia, is fighting the country’s Western-backed government. It has often planted IEDs on the side of the roads to take down passing government officials or African Union peacekeeping troops in the country.

But it has denied government claims they are behind the attacks or that street cleaners are the goal.

“Mogadishu’s street cleaners are killed by the same troops who frequently target the Tuk-tuk drivers of Mogadishu, and everyone knows who those are. They are the apostate militia and their foreign crusaders,” the statement added.

Most of them are widows who lost their husbands during the country’s 30-year-old civil war and are their families’ breadwinners. On any given day, there are at least 450 of them cleaning the streets of the Somali capital, according to the local city authority.

The highest earners take home $150 a month. Some receive food rations in exchange for the work and many work on a voluntary basis hoping to secure a job if and when one comes up.

A short distance away, Hawo Ali Hassan, an eight-year veteran of the streets is going through empty boxes left on the side of the road gently with two fingers.

Hawa says she doesn’t like her “very risky” job but has to do it to put food on the table for her large family.

“I would not recommend anyone to do it. You can die at any moment. I work seven days a week because I have to support my children and blind husband,” the mother of 10 children said.

Her husband became blind after a mortar landed near where he was working 10 years ago.

“I have no other option. I’m a mother. I will do anything to support my children. Yes, it is risky but I will take any risk for them,” the 58-year-old added as she moved to the next pile of rubbish that needed clearing. 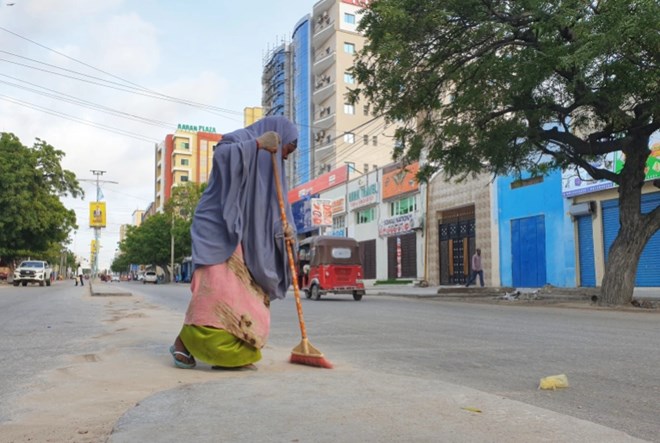 Relatives of the street cleaners lost in the line of duty are still coming to terms with the tragedy.

“I still remember receiving a phone call from my brother-in-law telling me my grandmother has been killed,” Hodma Abdishakur Hassan told Al Jazeera.

“She was blown up near Medina police station. She was just starting her shift. Her lower body was blown to pieces. She was alive first but died of the injuries a few hours later. She was not just my grandmother but was also raising me and my two other siblings,” Hodma added, tears dripping on her black niqab.

Fay Mohamed Hassan was 70 years old when she was killed in November 2011 and earning $120 a month, Hodma added. Two other female cleaners lost their lives in the same explosion.

IEDs are not the only threat the street cleaners face on a daily basis.

“We are easy target for robbers. Most of us have [been] robbed of mobile phones and valuables. If you work late at night or early morning then you will most likely get robbed. And they are very violent. It is why none of us want to wear high viz jackets because it will attract robbers,” Maryan said.

The local authority says they are doing their best to protect their staff.

“We have stopped them from working night shift for safety reasons,” Hussein Abtidoon Warsame, the deputy head of sanitation for Mogadishu municipality told Al Jazeera.

“We have started hiring male staff to deter thieves from targeting female staff. But it is not easy to find male staff because men don’t want to do cleaning work,” he added.

Hussein, who himself was badly injured in an attack claimed by al-Shabab and moves with the help of a walking stick, says government pays the hospital bills of those injured in the line of work.

“Sadly, we can’t afford to give compensation if someone dies. We don’t have the money. But we will give the position to family members if they wish [to] take up the work,” he added.

For the women going out every morning to keep Mogadishu clean, it is a risk they are long accustomed to.

“We have no one to protect us but God. In our line of work, we fear people. Not stray dogs or wild animals,” Maryan said.