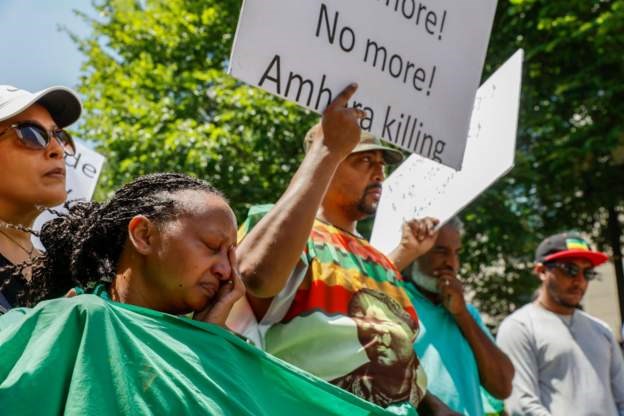 There have been protests against the mass killings in Ethiopia

Rights watchdog Amnesty International has called on Ethiopian authorities to launch an “impartial” investigation into last month’s killing of more than 400 ethnic minorities in the country’s Oromia region.

The killings showed the attackers’ “utter disregard for human life”, a new report by the organisation released on Thursday says.

advertisementsIt has been blamed on the armed group the Oromo Liberation Army (OLA), but authorities have also been criticised for failing to respond fast enough to the violence.

Government forces arrived hours after the attackers had left despite being told about the attack much earlier, according to witnesses cited in the report.

The OLA has denied carrying out the attacks, which it said was the work of a militia group set up by the government.

Amnesty called the Tole killings “a callous massacre” and it was followed – two weeks later – by similar attacks in a different district in the region.

Officials vowed to take measures in the wake of the two attacks and promised to conduct investigations.

But there are already some who have raised questions on the independence of a government-led probe.