Earth’s population reaches 8-billion milestone, but this upward trend may not continue for long

Earth’s population reaches 8-billion milestone, but this upward trend may not continue for long

Last time we added 1 billion to the population was 2010 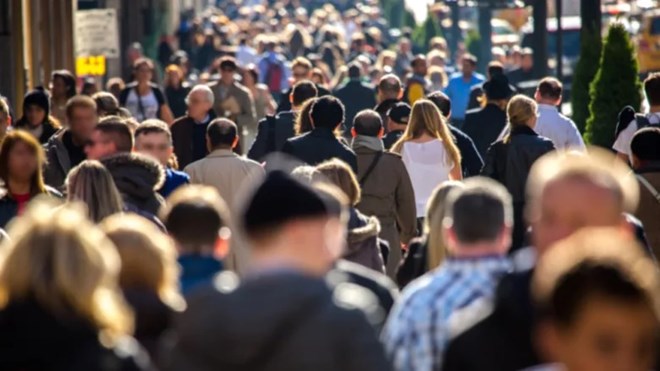 It’s not an exact science. It may have happened weeks or months ago or may not even have happened yet. But the fact is that humans are abundant on this planet and our population is on an upward trend. At least until the end of the century.

Between 1804 and 1927, the global population grew from one billion to two billion. It took 33 years after that to reach three billion. Since then, it’s taken roughly 12.6 years to add another billion people.

But at least one population expert is skeptical about this projection by the UN.

“This is the last time we’re probably going to have a conversation about reaching another billion marker,” said Darrell Bricker, CEO at Ipsos Public Affairs and a fellow at the University of Toronto’s Munk School of Global Affairs and Public Policy.

‘Where we’re going to end up’

“Somewhere between eight and nine billion is where we’re going to end up [by the end of the century],” said Bricker, who co-wrote Empty Planet: The Shock of Global Population Decline.

“The reason that it’s not going to increase more than that is because … China now is recording its lowest birth rate in history. India has just dropped below replacement rate for its birth rate. That’s 36 per cent of the entire global population that are now not replacing or not at replacement level birth rates.”

And once it gets to eight or nine billion people, he said, it’s likely it’ll drop even lower.

Patrick Gerland, chief of the population estimates and projections section in the UN’s population division, believes the agency’s numbers are sound, but does agree that the population will level off some time in the relatively near future.

Gerland said the 10.4-billion projection is more of an upper range than a lower one.

Why the discrepancy between what Bricker anticipates and the UN projections?

“The UN always seems to be playing a game of catch-up. And I’ll give you a great example of this: They put out their last big recalculation of human fertility rates in 2017, so about five years ago. They have since revised down their population number from 11.2 billion people by the end of the century to 10.4 billion,” Bricker said.

And that 800-million decline is a big one, he said.

Though there are certainly exceptions, he said that globally, it’s the same: People are simply having fewer children.

Birth rates are on the decline almost everywhere

Africa, which has had high birth rates, is also seeing a decline. Between 1950 and 1980, the continent had roughly 6.5 live births per woman.

However, now it’s roughly 4.4 live births per woman. It may not look like a steep decline, but that’s because not all parts of the continent are seeing the same rate of decline in births.

However, two of the biggest examples are in two of the most populous countries: China and India.

China has a population of roughly 1.4 billion people; India, slightly lower. But both countries have seen declining fertility rates.

“The single biggest factor [for population levelling off] is declining fertility rates,” Bricker said. “If you go back to places like India, their reproduction peaked somewhere in about the 1970s. And it’s been declining ever since.”

As for China, its one-child policy — an attempt by the Chinese government in the 1970s to curb population growth — was dropped in 2016, but the annual growth rate is stagnant at zero per cent, a sharp contrast to nearly 3.5 per cent in 1963.

“China today is very different from what it was one generation ago,” said Gerland.

“These kinds of transformational changes have happened within one generation. So the story is basically that many, many, many countries and regions face a certain type of problem that are already starting to become more [challenging because] of the population aging.”

The UN report also found that in 2021, the average fertility rate globally was 2.3 births per woman, down from five births per woman in 1950. That rate is forecast to drop further to 2.1 by 2050. It also noted that the global growth rate dropped to below one per cent for the first time since 1950.

Bricker said that both of these things — a decline in births and an aging population — will present challenges we’ve not yet seen, particularly economically.

“When you’re dealing with a population that’s aging, you’re dealing basically with people who’ve gone through the consumptive part of their life,” he said.

And that’s something he thinks governments should keep in mind while looking ahead as the population declines.

“I think that we’re kind of sleepwalking into a future that’s going to be very difficult to manage,” Bricker said. “And that there are going to be all sorts of challenges that we need to start thinking about today.”