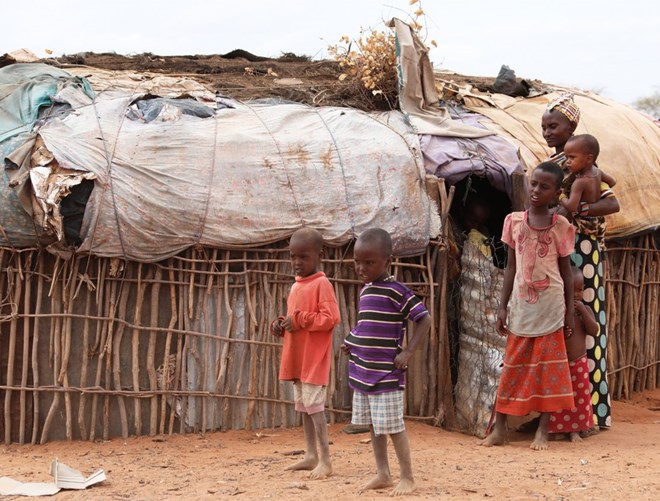 A mother and her children were seen in a drought-affected village in the town of Laisamis, Marsabit County, Kenya, on Oct. 24, 2022. (Xinhua/Dong Jianghui)

ADDIS ABABA, Nov. 23 (Xinhua) — The impact of drought in Kenya, Ethiopia, and Somalia has led to food insecurity and a high level of acute malnutrition, the United Nations World Food Programme (WFP) has warned.

The WFP, in its latest drought response situation report released Tuesday, said some 22 million people are food insecure due to drought across the affected countries.

It further warned that the loss of livestock and reduced productivity has eroded the livelihoods of the affected pastoral communities.

In 2022 alone, at least 9.2 million livestock deaths occurred in the drought-effected areas of Ethiopia, Kenya and Somalia, according to figures from the WFP.

This photo shows a girl fetching water in the town of Laisamis, Marsabit County, Kenya, on Aug. 26, 2022. (Xinhua/Dong Jianghui)

The WFP, citing the latest IPC Famine Review Committee projections, further warned that famine is likely to occur in three areas in the Bay region in Somalia between October to December.

It said the drought condition is further deteriorating the already dire humanitarian condition across the region.

It said the region has recorded a significant increase in the price of local food baskets with Somalia recording the most expensive food basket in the region.

Amid the worsening impacts of the ongoing drought, the WFP said it has scaled up response across the Horn of Africa to respond to severe food shortages by providing lifesaving food and nutrition assistance to affected communities.

In Somalia, WFP has more than doubled its life-saving food assistance from 1.7 million people in April 2022 with plans to reach 4.5 million in the coming months, it said.

People were seen at a camp on the outskirts of Mogadishu, capital of Somalia, on Feb. 4, 2022.  (Photo by Hassan Bashi/Xinhua)

The WFP is also enabling communities to recover faster and better from the drought by investing in interventions that promote resilience and adaptive capacities of communities to deal with shocks.

It, however, noted that forecasts indicate a potential increase in needs, in which additional funding is needed to sustain and scale up assistance to prevent more dire outcomes.

The WFP said it urgently needs 1.27 billion U.S. dollars for all its operations in Kenya, Ethiopia and Somalia for the period from November 2022 to April 2023.