War in Tigray may have killed 600,000 people, peace mediator says 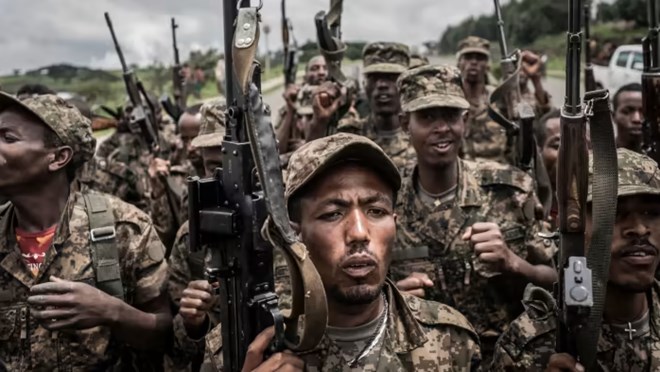 The brutal civil war in northern Ethiopia may have killed as many as 600,000 people, making it one of the world’s deadliest conflicts of recent times, according to the African Union’s lead mediator in the peace talks that ended the two-year conflict.

“The number of people killed was about 600,000,” former Nigerian president and African Union envoy Olusegun Obasanjo told the Financial Times in an interview.

He recalled that on November 2 last year, the day the peace agreement was signed in Pretoria, Ethiopian officials said: “We have stopped 1,000 deaths every day.”

Fighting broke out in Ethiopia’s northern Tigray region in November 2020 after Addis accused Tigrayan fighters of attacking the federal army and spread across the neighbouring Amhara and Afar regions.

The US and former Kenyan president, Uhuru Kenyatta, played a leading role in the peace talks, but Obasanjo was also an important mediator in the process. The breakthrough followed rapid negotiations between the government of Ethiopian prime minister Abiy Ahmed and the Tigray People’s Liberation Front, the party that controls Tigray.

Tim Vanden Bempt, who is part of a research group investigating civilian atrocities in Tigray at the University of Ghent, said Obasanjo’s 600,000 estimate might be roughly correct. Tigray was blockaded for long periods, making independent analysis of what went on, including how many people died, extremely difficult, say experts.

“Based on reports from the field, the number of dead could be somewhere between 300,000 and 400,000 civilian casualties only — this from atrocities, starvation, and lack of healthcare,” Vanden Bempt said. In addition he said there were unofficial estimates of between 200,000 and 300,000 battlefield deaths, though these could not be accurately verified.

The war in Tigray was marked by waves of violence against civilians, including massacres and rapes, by the armies of Ethiopia and neighbouring Eritrea, as well as Tigrayan fighters, regional forces from Amhara and militias sucked into the conflict.

The fighting endangered the unity of Ethiopia, a federal patchwork of 80 ethnic groups, which had been one of Africa’s fastest-growing economies before war broke out.

If Obasanjo’s estimate stands, it would put deaths in Ethiopia at roughly three times the number estimated to have died following Russia’s invasion of Ukraine last February, although accurate numbers are difficult to ascertain there too. It would also be a much higher death toll than during the five decades of civil war in Colombia.

Daniel Bekele, Ethiopia’s human rights chief, said casualty estimates should be treated with extreme caution. “We will probably not be able to know the full number of casualties,” he said. “We need to be cautious about overly exaggerated death toll estimates by all sides.”

Some Ethiopian officials believe the true casualty figure is closer to 80,000 or 100,000, roughly the same number that died in a 1998-2000 border war between Ethiopia and Eritrea.

Death tolls from wars in Africa are notoriously controversial. Some estimates put the number of people who died from all causes, including starvation, during conflicts in the Democratic Republic of Congo between 1998 and 2008 as high as 5.4mn. But that number has been disputed by academics, some of whom say the true death toll is far lower.

Under the Ethiopian peace deal, the TPLF agreed to disarm and demobilise. On Wednesday, Getachew Reda, a senior member of the TPLF, said: “Tigray has handed over its heavy weapons as part of its commitment to implementing the Pretoria agreement.”

Eritrea was not a party in the peace agreement and its presence in Ethiopia remains a bone of contention, although Obasanjo said Eritrean forces had already started to withdraw. Some analysts have questioned whether Abiy will be able to force all Eritrean fighters to leave.

Last month, a grouping of Tigrayan civil society organisations said Eritrean forces continued to kill civilians after the November agreement. “We’ve gone past that,” Obasanjo said. “The latest is that all Eritreans are at the border,” he said, conceding that not all had returned home.

Obasanjo said the next step was for Ethiopia’s parliament to declassify the TPLF as a terrorist organisation, something he said would happen sooner rather than later. “I believe we have gone beyond the point of no return,” he said. “I believe the guns are silenced.”