US Army to train some African countries in cyber, land and maritime defence

US Army to train some African countries in cyber, land and maritime defence 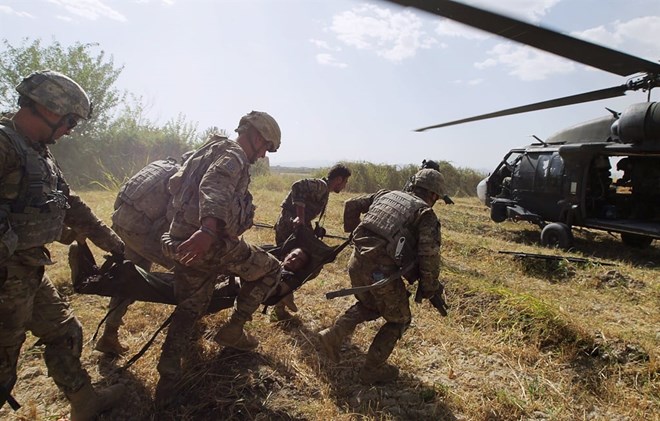 US soldiers carry a wounded person to a helicopter. Justin Sullivan

Divisions of the United States Army in Africa will hold a series of engagements and training with its African partners beginning next month.

Armed forces of Botswana, Rwanda, Uganda, Kenya, Djibouti and Somalia will take part in the exercise code-named “Justified Accord” from late this month.

According to the US Army’s Southern European Task Force – Africa, Justified Accord 2023 (J23) is “designed to increase multinational interoperability in crisis response and counterterrorism operations, and prepare regional partners for United Nations and African Union mandated missions”.

The US Army’s Africa Command said the training would include approximately 800 participants from 20 partner nations, including six African countries.

Activities will take place largely in Nairobi and Isiolo in Kenya, with other activities taking place in Uganda, Rwanda, Botswana, and Djibouti.

Last week, personnel with the US combined joint task force for the Horn of Africa travelled to the port of Berbera in Somaliland on a sight survey.

“The US military routinely surveys potential operating locations to prepare for contingencies and exercise readiness or adjust force posture as directed,” said the US combined joint task force in a statement.

The 10-day training exercise is meant to help the US Army Africa and East African participants improve their capacity to respond to regional security threats posed by violent extremist organisations and to more effectively counter the associated ideology.

It also helps to forge partnerships with US Army Africa and the East African military forces. Meanwhile, the Exercise Obangame Express 2023 (OE23) – the largest multinational maritime exercise in Western and Central Africa – will start its 12th year with 29 participating nations at an opening ceremony in Lagos, Nigeria, on 23 January.

In a statement, the US Naval Forces Europe and Africa said OE23 “is designed to improve regional cooperation, information-sharing practices, and tactical interdiction expertise to enhance the collective capabilities of participating nations to counter illegal, unreported and unregulated fishing and other sea-based illicit activity”.

In order to secure the ongoing sustainable use of marine resources and to promote the security and stability of international maritime trade, the United States Africa Command supports its African partners in defending their maritime economies.

Editor’s note: An earlier version of this story incorrectly stated that Somaliland would take part in the exercise. It is, in fact, Somalia which will be taking part. This has been corrected. We apologise for the error.